This article, by Stephen Gilburt, was printed in the Enfield Society newsletter 211, Autumn 2018.

Hidden Treasures—revealing Broomfield House and Park is an interesting exhibition which may be seen at the Dugdale Centre, Enfield Town until 6th January 2019. Its has been curated by Stacey Anne Bagdi, from the Museum of Enfield, and the Broomfield House Trust. The exhibition contains prints, photographs, maps, paintings and artefacts from when the house was lived in and from when it was a museum. Views and objects connected with some of the various activities which have taken place in the house and park will bring back many memories. 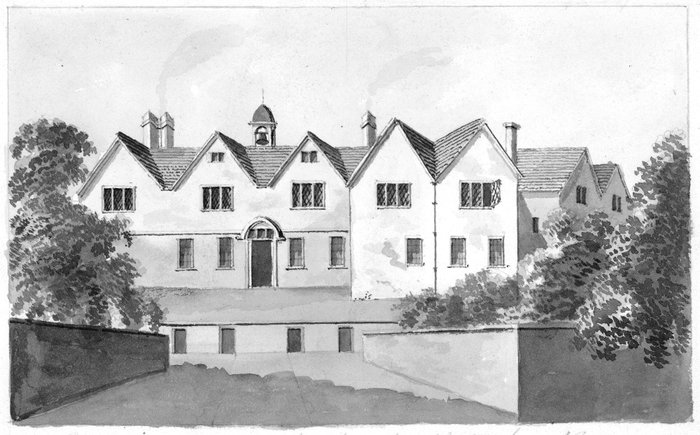 Illustration1: Named after John Broomfield, Broomfield House was originally a two-storey timber-framed 16th century farmhouse with two or three rooms on each floor. Later in the 16th century it was extended at the northern end with a timber-framed gabled wing over a brick basement and two chimneys were inserted. The house was later owned in turn by Geoffrey Walkaden and Richard Skevington. In the early 17th century it was occupied by Alderman Sir John Spencer, who sold it to Joseph Jackson. Further timber-framed additions were constructed to the south-west and north in the 17th century. By 1624 the house was recorded has having 14 hearths. In the 18th century a brick service wing containing a kitchen, pantry and scullery was added to the south-east. This 1800 watercolour shows the main gabled west front of Broomfield House, which then had a U-shaped plan. 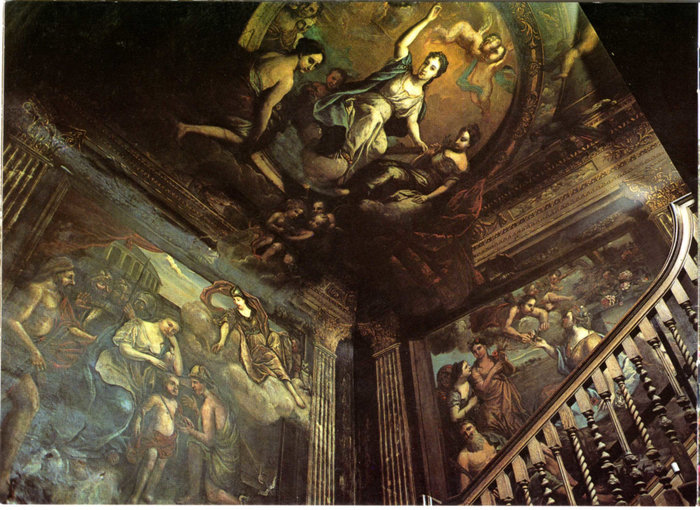 Illustration 2: In the early 18th century a fine baroque oak staircase with an ornate balustrade was inserted at Broomfield House. In 1726 the walls and ceiling of the staircase hall were covered with classical mythological paintings by the Flemish artist Gerard Lanscroon. Other murals by Lanscroon can still be seen at nearby Arnos Groove, Southgate Green. The ceiling painting at Broomfield showed a female figure holding a carpenter’s plane, which may refer to the origins of the Jackson family’s wealth. On the wall to the right were four female figures representing the seasons. On the left wall Mercury, messenger of the gods with a winged helmet, was shown kneeling before Cupid. Behind Cupid were his mother Venus goddess of love and father the craftsman Vulcan, god of fire. Above was Minerva, with an owl behind her symbolising her wisdom. 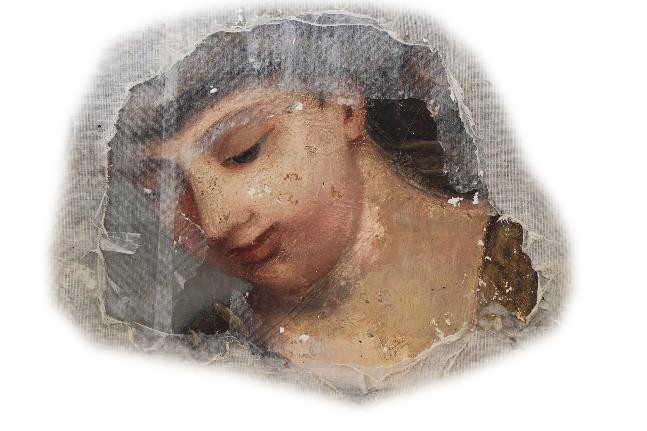 Illustration 3: The murals were damaged by fire in 1984 and the surviving fragments are now held in store by Enfield Council. The head illustrated is that of Minerva. The whole figure of Minerva has now been conserved with a grant from The Enfield Society. And is one of the highlightes of the exhibition. Examples of the three designs of balustrade and a partial reconstruction of the staircase are also on display. 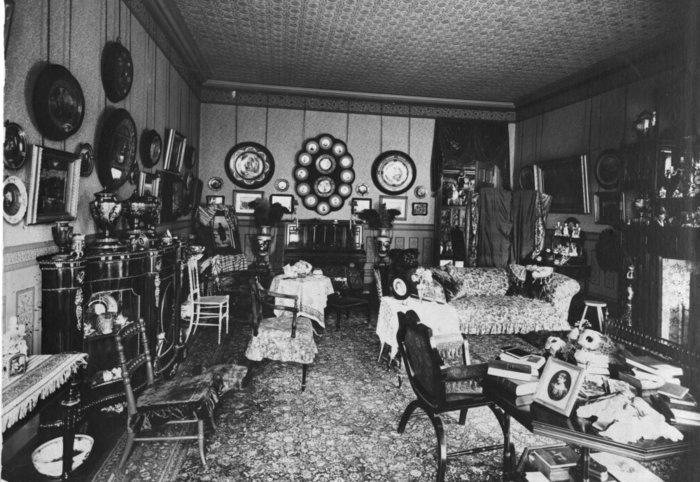 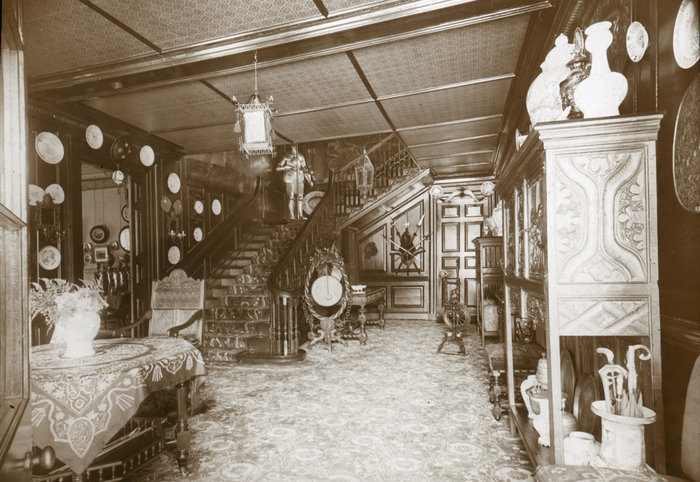 Iluustrations 4, 5: The Jackson family held the estate for nearly 200 years until Mary Jackson married William Tash. At his death in 1816, Broomfield was bequeathed to henry and Louisa Powys. About 1820, the north end of the house was demolished and rebuilt in brick with two large reception rooms on the ground floor. The roof was rebuilt, the gables were removed and the courtyard was filled in to give a nearly rectangular shape to the plan of the house.

The Powys family remained owners until 1903, although the house was let to tenantsi ncluding William Rathbone, a deputy of the Corporation of London, who lived at Broomfield House from 1858.

Between 1875 and 1901, the tenant was Sir Ralph Littler. He became a barrister in 1857 and a QC in 1877, specialising in promoting railway bills. From 1875 he led the campaign to separate Southgate, which included Winchmore Hill and Palmers Green, from the Edmonton Board of Health. Despite opposition from Edmonton and from some people in Southgate, expressed at public meetings, he succeeded in getting a a separation bill passed by Parliament. A new Southgate Board of Health was established in 1881. Southgate subsequently became an Urban District in 1894 and a Municipal Borough in 1933. These photographs show the drawing room and staircase hall at Broomfield House during Sir Ralph Littler’s occupation. 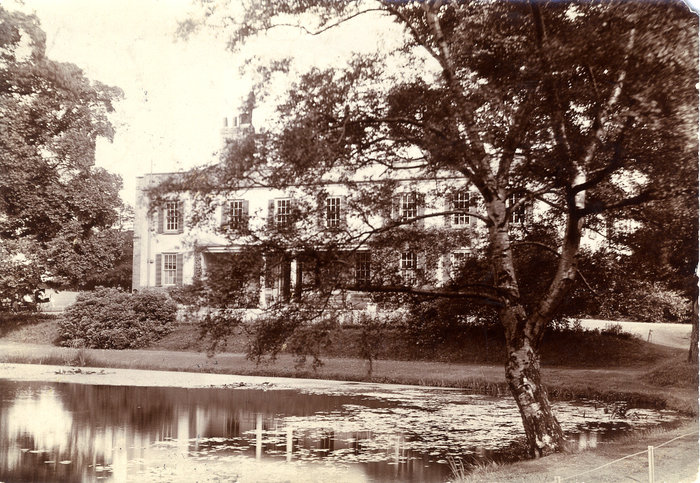 Illustration 6: In 1903 most of the estate was sold for housing, but Southgate Urban District Council purchased the house and 54 acres of grounds for a public park at a cost of £25,000. The house was used by Southgate County School between 1907 and 1910. A maternity centre was opened on the first floor in 1917 and a dental clinic in 1929. This view shows the West Front as it appeared before 1928. 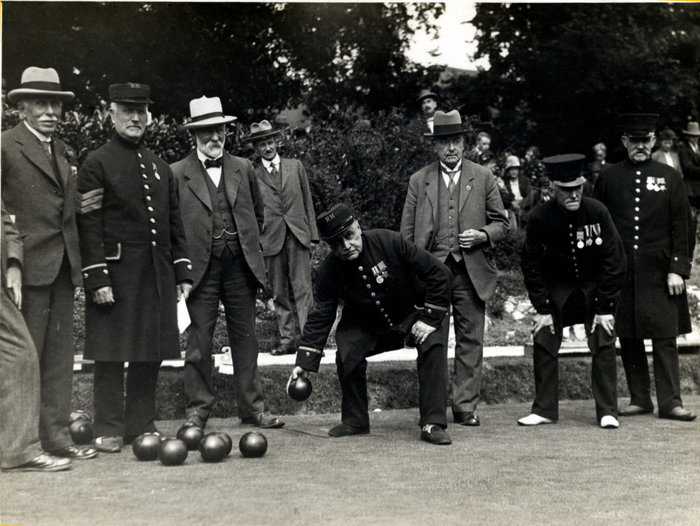 Illustration 7: The park has been used for a variety of leisure activities, including; running, football, tennis, netball, swimming and sailing model boats. Here a group of Chelsea Pensioners are shown enjoying a game of bowls in the 1920s. 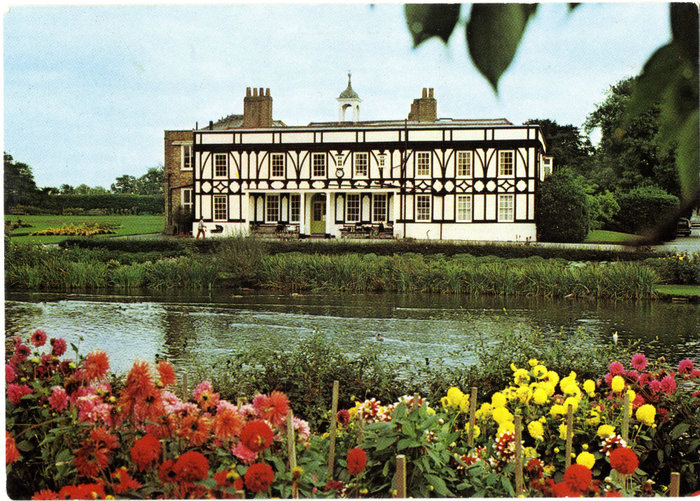 Illustration 8: Between 1928 and 1932, Southgate Urban District Council removed the existing roughcast and covered the exterior of the house with mock Tudor timberwork. The north wing, rebuilt in brick in the early 19th Century, was not refaced. The house was listed Grade II in 1950 and was upgraded to II* in 1971. The park is also listed. This view shows the west front of Broomfield House as it appeared up to 1984. 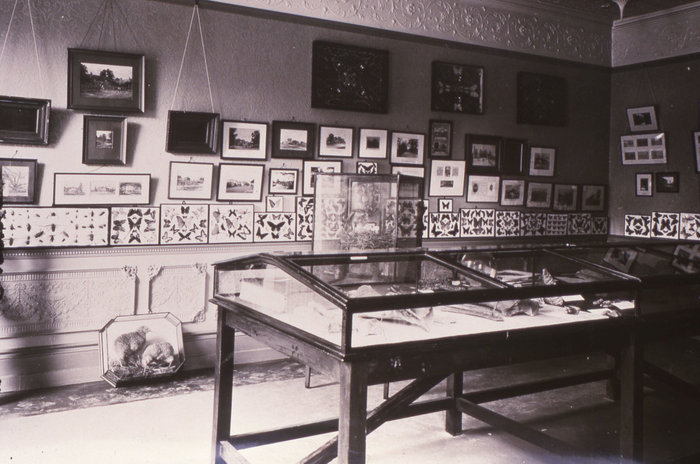 Illustration 9: Broomfield Museum opened on the ground floor in 1925. After wartime use by the RAMC, the museum re-opened in 1949 with a café on the ground floor and a health centre on the first floor. The permanent museum collection included stuffed animals and birds, a glass sided beehive and fossils. There were also various temporary exhibitions, often on local subjects, such as Sir Thomas Lipton and the Cresswells. The Dugdale Centre exhibition includes mounted butterflies and a stuffed fox from the Broomfield Museum collection.

In 1984 the top floor and roof were destroyed by a fire caused by an electrical fault. The timber parts of the structure were further damaged by arson attacks in 1993 and 1994. The remaining part of the building is now supported by scaffolding and covered with sheeting to try and protect the ruin from further damage. In 2003 the house featured in the BBC television series `Restoration’. Various proposals for restoring and bringing the house back into use have been made. The plans have included; a banqueting hall, a theatre, a public house/restaurant and sheltered housing between the house and the stable block. However, not one of these plans have been carried out.

Visitors to Broomfield House today can enjoy various activities and see the ponds and the flower beds as well as the listed Garden House, Stable Block and walls dating from the 16th to 18th centuries.

The Enfield Society provided a grant for restoring railings from the former Palmers Green triangle public toilets and relocating them to enclose the glasshouse in Broomfield Park.

For more information and illustrations see:

Broomfield, An Illustrated History of the House and Garden by Steven Brindle 1994;

Broomfield House, Enfield, the structural development of the house by Richard Lea 1994;

Once Upon A Time in Palmers Green by Alan Dumayne 1988;

The Old Borough of Southgate by Alan Dumayne 1988;

Southgate and Edmonton Past by Graham Dalling 1996;

The Buildings of England, London 4 North by Bridget Cherry and Nikolaus Pevsner 1998;

Most of these may be consulted at Enfield Local Studies Library and Archives which also supplied the illustrations used in this article.