This article by Stephen Gilburt was published by The Enfield Society in newsletter 215, Autumn 2019 and is a companion to the article which appeared in newsletter 216 (Winter 2019).

“Ledgers are closed and desks abandoned…we are off on the Great Northern Railway and our destiny is Enfield. Some fifty trains a day on each of two lines of rails make Enfield a place for a ramble and a pleasanter [one] we could not easily find… The air is as virtuous as the place is green… Its nucleus of houses is picturesque as viewed from the brows of adjacent slopes. Its lovers lanes are its charms… and might be rendered still more charming if we could but find an occasional seat, on which to settle our reflections.”

The Saturday market flourished and shopping parades were built in Church Street. Several banks opened branches in Enfield Town and the Post Office, after occupying various buildings, moved to its present site in Church Street in 1906. Public houses were rebuilt and the Police station was relocated to London Road in 1873.

The Local Board of Health appointed Dr. John James Ridge as Enfield’s first salaried Medical Officer of Health in 1881. He held the post until his death in 1908. He was involved in establishing the voluntary Enfield Cottage Hospital in Chase Side in 1873 and an isolation hospital at South Lodge in 1900. He was also the scourge of slum landlords as he sought to improve living conditions, especially for the poor.

In 1880 a volunteer fire brigade was formed, which in 1883 rented a fire station in Southbury Road, opposite the 1872 Great Eastern Railway station and purchased a new steam-powered water pump. The fire brigade later moved to a new fire station in Little Park Gardens (where the bus stand is now).

Thanks to a campaign led by non-conformists, including Reverend Henry Storer Toms, minister of Christ Church Congregational Church and his deacon George Spicer, Enfield School Board was established in 1894. Nine elementary schools for children up to age 13 were constructed by the Board and its successor Enfield Education Committee between 1896 and 1914. These supplemented the earlier Church of England supported National Schools. In 1909 Enfield County Girls School opened in Holly Walk and Enfield Grammar School for boys was extended. After Chase Side House was demolished in 1901, 23 acres were purchased by Enfield Council to create Enfield Town Park and Enfield Central Library was built in 1912.

New Anglican, Roman Catholic, Congregational, Presbyterian, Baptist, Methodist and Salvation Army places of worship were established in and around Enfield Town during this period.

A variety of activities and entertainments took place in the 1858 Riding House at Enfield Court in Baker Street and at the 1881 Bycullah Athenaeum on Windmill Hill. These included flower shows, church services and bazaars, dinner dances, plays, band concerts, oratorios, operas and films. Entertainment was also provided at Pleasant Sunday Afternoon branches. These had slate clubs, (which were like credit unions) and were often associated with churches or chapels.

Enfield’s first cinemas were the Enfield Empire, which opened in 1909 in a converted hall in Silver Street and the Picturedrome, which opened in 1911 in a converted brewery building in Horseshoe Lane. (They had both closed by the end of the First World War). Enfield’s first purpose-built cinema was the 1911 Queen’s Hall in London Road. It had 650 seats upholstered in red plush velvet. Sweets and chocolates were sold by the usherettes and initially a free cup of tea was served at matinees. The silent films were accompanied by a pianist and sometimes also by a violinist and cornet player. (The cinema was enlarged with seating for 1,300 when sound equipment was installed in 1928 and then renamed the Florida in 1947, but finally closed in 1976. It was later converted into the Town House supper club but was demolished for the Genotin Road extension).

With thanks to Enfield Local Studies & Archive for the illustrations used. 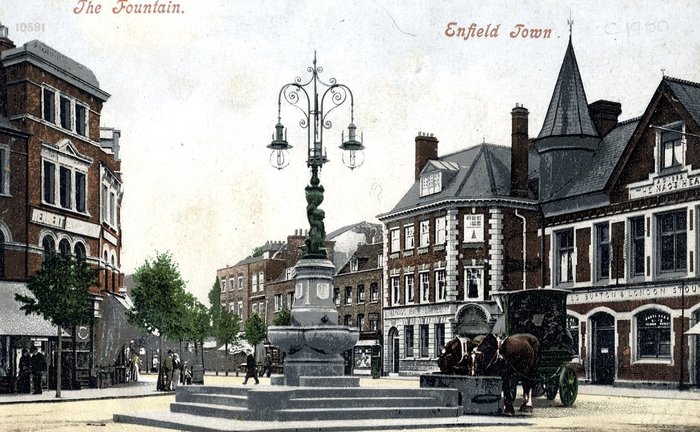 Illustration 1. This colour postcard of The Town around 1905 shows the granite drinking fountain completed in 1885. It has an elaborate gas standard—gas was introduced to Enfield in 1852. The adjoining horse trough can be seen in use. Behind is the 1892 Lloyds bank and, on the other side of Southbury Road, the Nags Head public house, which is first recorded in 1723. It was rebuilt in 1882 with stabling for horses at the rear. Inside, ale and wine were served at two bars and tea and coffee were available in a coffee room. At the back was a parlour for customers to sit and eat a meal. (The Nags Head was rebuilt again in 1932 but finally closed in the 1960s. The building was later extended upwards). 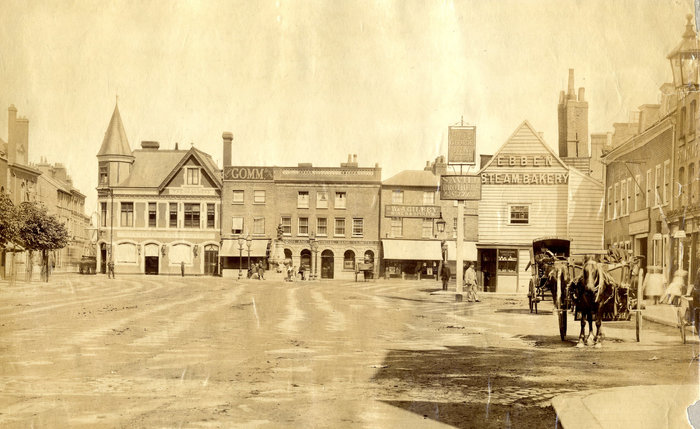 Illustration 2. This largely traffic free view of The Town in 1884 shows Gomm the butcher “noted for the best home killed meat… and delivered to all parts, including Clay Hill, Forty Hill and Winchmore Hill.” and Gilbey’s wine and spirits. On the right is the 17th century timber-framed, weather-boarded Ebben Steam Bakery which operated between 1850 and 1955. At one time there was a restaurant on the first floor. The cart with a canopy belonged to the Singer sewing machine company. Behind is the early Georgian brick built The George which is first recorded in 1548. 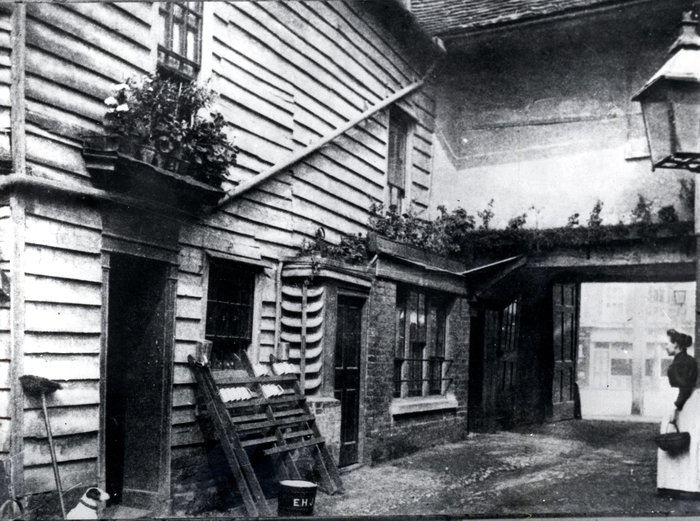 Illustration 3. The large entrance to The George allowed coaches to pass through to a yard where there was stabling for horses. Buildings to the side of the yard were timber framed and weather-boarded. 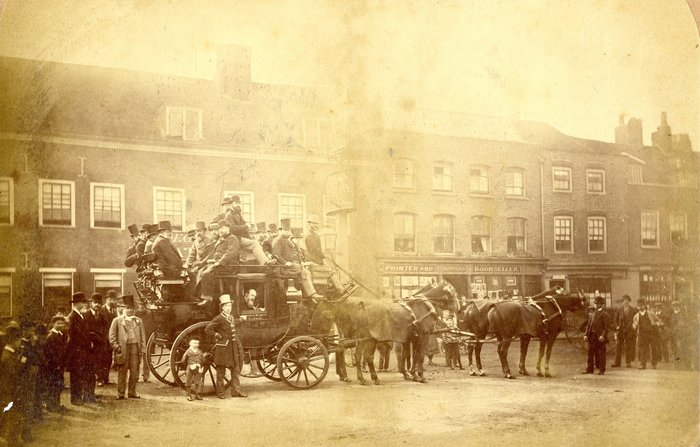 Illustration 4. The Hirondelle, with seating for over 20 passengers, offered a regular coach service between Enfield, Luton and Hitchin in the late 1870s. It left The George at 10.45am and arrived at The Sun inn, Hitchin at 1.30pm. The return fare was 9 shillings (45p). The service was run by Col. Sir Alfred Somerset and the Hirondelle was kept in his coach house at Enfield Court, Baker Street (See tes News 192). One of the buildings to the right of The George served as Enfield Post Office between about 1860 and 1885 when it moved to Southbury Road. 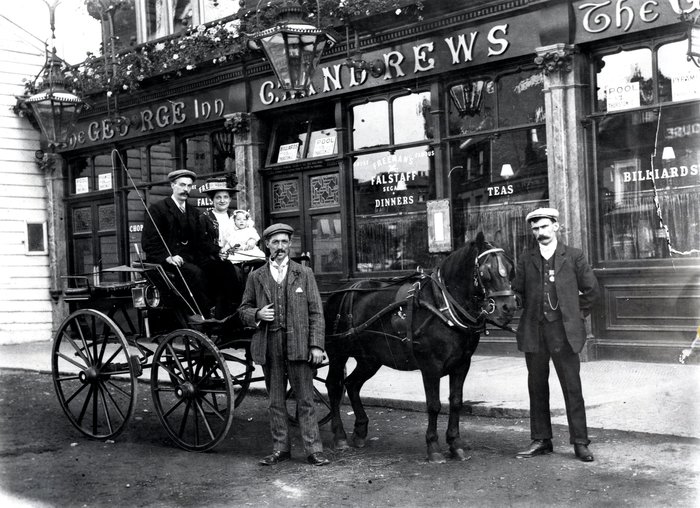 Illustration 5. The George was rebuilt in 1895 and then provided a private bar, a serving bar and a saloon. Dinner and teas were also served. A room at the back provided facilities for playing billiards and pool. On the first floor was a large hall, (which later became the Masonic Room) and a club room. This view taken between 1902 and 1911, when the licensee was Charles Andrews, shows a family in an open carriage ready for an outing. (After several recent name changes, the pub is now an O’Neill’s.) 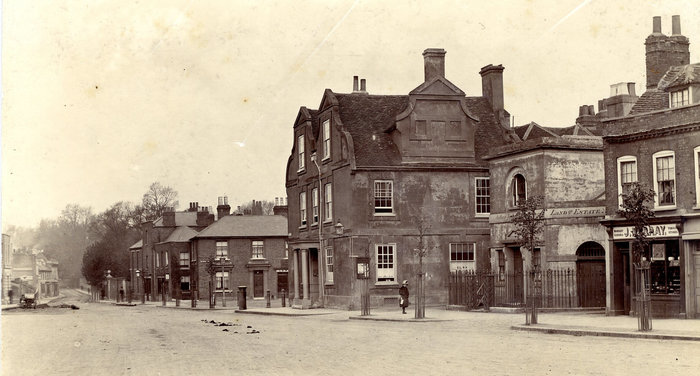 Illustration 6. In the centre of this 1880s photograph of the north side of The Town, is the 17th century former Greyhound inn with its Dutch Gables. After 1860 the inn was used as local government offices and a court house. After the Enfield Local Board of Health moved to Little Park in Gentlemans Row, the building was occupied by a photographer’s studio and Enfield Building Society. Deposits from horses can be seen in the road. (See Enfield Society News 197).

The 1829 beadle’s office to the right contained two lock-up cells. From 1840 it served as Enfield’s first Police station. In 1873 a new Police station was opened in London Road. It included stabling for police horses. (The Old Vestry House is now used by The Old Enfield Charitable Trust.) 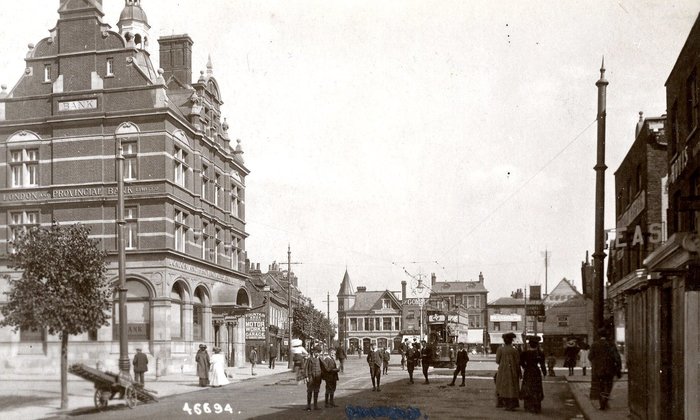 Illustration 7. In 1897 the former Greyhound inn was replaced by W. Gilbee Scott’s Flemish Renaissance style London and Provincial Bank, which in 1875 had been the first bank to open a branch in Enfield. (It was bought by Barclays bank in 1918.)

An electric tram can be seen outside The George, where the route north from Winchmore Hill to Enfield Town terminated in 1909. A branch from Ponders End, west along Southbury Road, opened in 1911 but stopped short of The Town. (See Enfield Society News 209.) Note the people standing in the middle of the road. The risk to pedestrians from trams is referred to in this rhyme of the period:–

“Pray what is that, Mama,

It is your dear Papa,

run over by a tram.”