This article by Stephen Gilbert was published by The Enfield Society in Newsletter 192, Winter 2013.

The Grade II listed Enfield Court was built in 1690 as a two-storey brick building with two windows on each side of the entrance, a basement and curved dormer windows in a green slate roof. Owners included Robert Buckworth, Rev. Thomas Brattell and General John Martin, who died in 1852. He bequeathed Enfield Court to his godson, Colonel, later Sir, Alfred Somerset. (He was the son of Lord John Somerset, who may have saved the life of the then Captain Martin at Waterloo in 1815.)

The “six-box” stable to the north west of the house was largely rebuilt in 1995, but the original horse mounting block outside was retained. The ground floor was converted for use by Enfield Grammar School, initially as a science laboratory but it is now a music room. The first floor bedrooms for stablemen and whips later became a school caretaker’s flat. The carriage horse stable was used by Enfield Grammar School for wood and metalwork. Horses were washed in the harness room and coaches were washed in the “glass house” between the main house and the stables. The water for the washing came from the New River and was filtered before use. The coach house contained Colonel Somerset’s famous coach, the Hirondelle, which he ran for some years between Enfield and Hitchin. 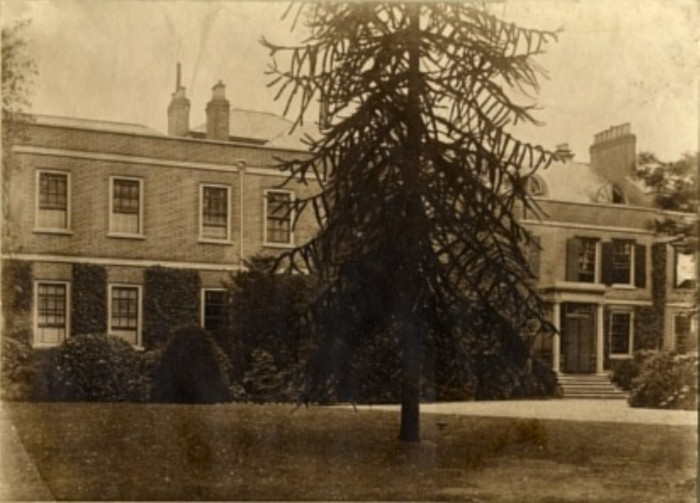 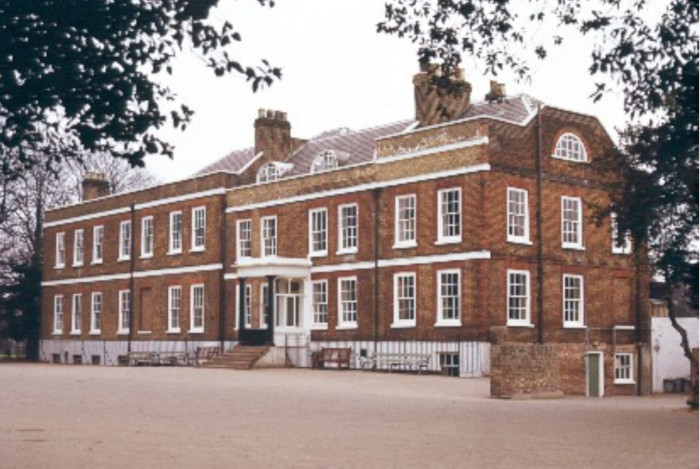 Illustration 2: View of Enfield Court from the north-east in 1973 after the evergreen trees and shrubs had been replaced by the school playground. 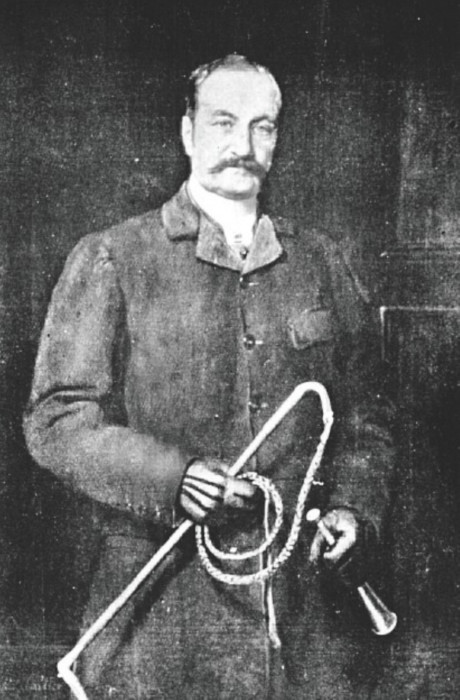 A 63-foot diameter circular riding house, with a reed-thatched roof, was built in 1858 and altered in 1863. When not used for riding or exercising horses, the floor was covered, seats for up to 600 people were installed and band concerts, dances, public dinners and flower shows were held. The riding house was destroyed by incendiary bombs during the Second World War.

Colonel Somerset was the commander of the local volunteers. He was also master of the Enfield Chase Staghounds, the kennels for which were in the field beyond the New River. The deer were kept in the deer run near the tennis courts during the day and were exercised in a ring on a site where a new gymnasium was subsequently built in 1957. The gravestone of Colonel Somerset’s dog Nettle can still be seen in the grounds.

Sir Alfred Somerset died in 1915 and was buried in St Andrew’s churchyard. His widow Adelaide, whom he had married in 1857, died in 1920. The house and seven acres of ground were sold to Middlesex County Council. After some renovations and alterations, Enfield Court reopened as the Enfield Grammar Lower School in 1925. 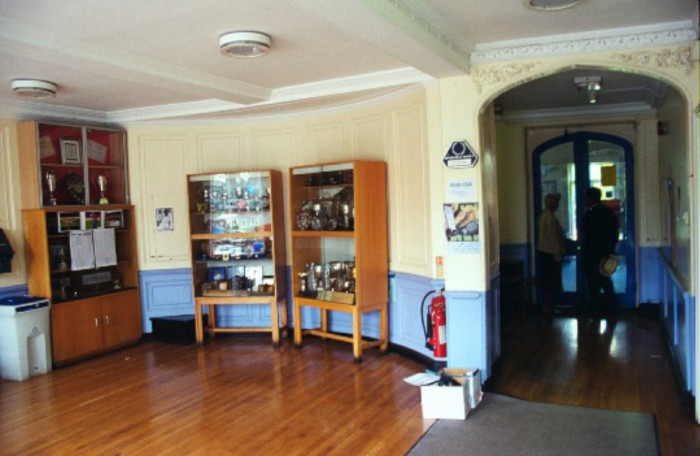 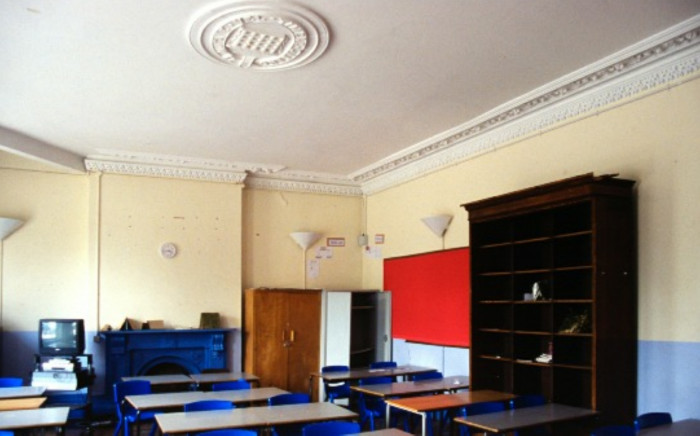 Illustration 5: This classroom in the 1864 south extension still retains its original Victorian fireplace and the plaster ceiling roundel incorporating the Beaufort portcullis. 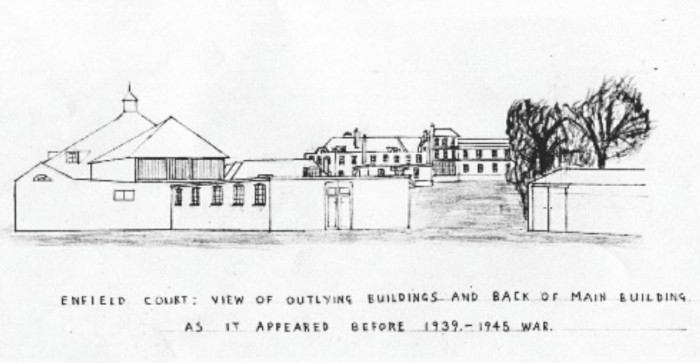 Illustration 6: The west front of Enfield Court with the former stables, circular riding house and old gymnasium as they appeared before the Second World War. (This drawing was provided by P.J. Walker.) 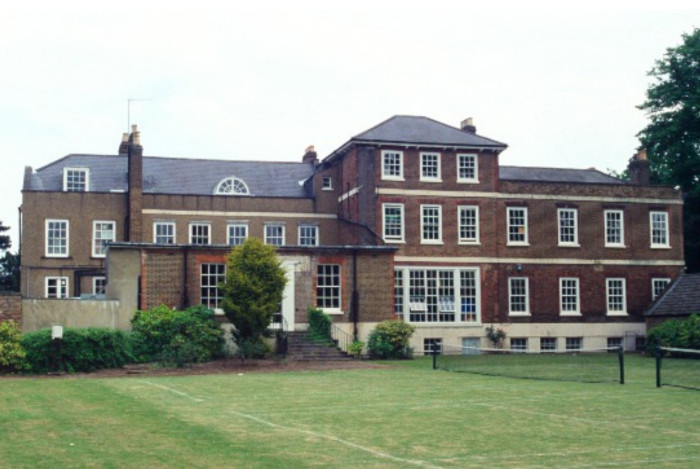 Illustration 7: West front of Enfield Court from the tennis court in the former walled garden, in 2008. 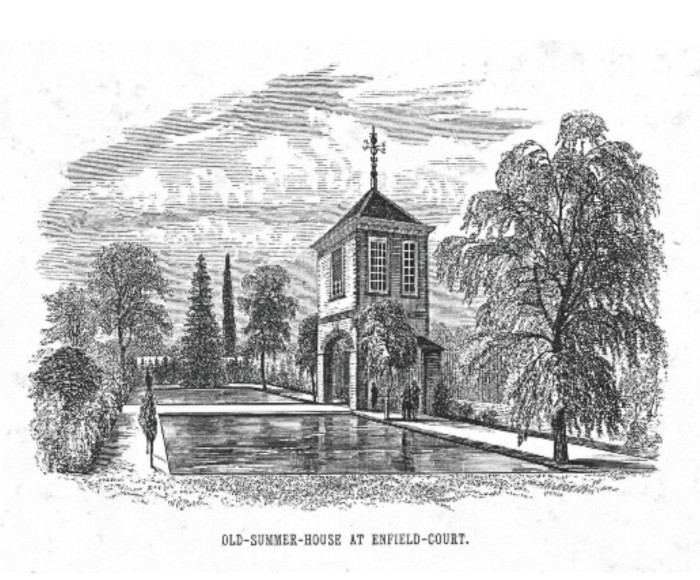 Illustration 8: This view from Ford and Hodson’s 1873 History of Enfield shows the two-storey 1690 summer house at the end of the walled tree-lined flower garden. The ponds were filled with water from the New River which flowed through the grounds of Enfield Court. Picture courtesy of Enfield Local Studies Centre and Archive. 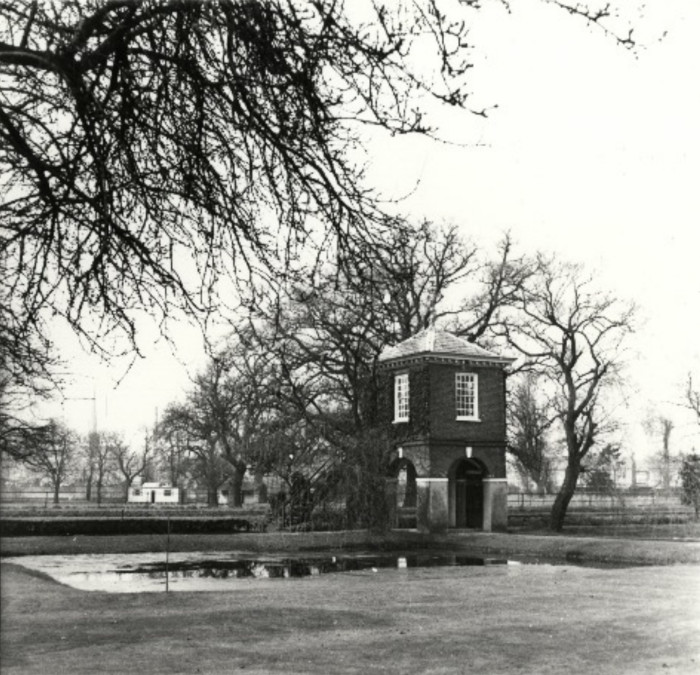 Illustration 9: The summer house and ponds in the 1930s with the New River and sports field in the background. Picture courtesy of Enfield Local Studies Centre and Archive.