This article by Stephen Gilburt was published by the Enfield Society in the Summer 2016 newsletter.

The parish of St John the Baptist, Clay Hill, was established in 1867 based at the 1857 chapel of ease belonging to St Andrew’s parish church. St John’s parish was divided in 1899 when St Luke’s parish was created, but was re-united in 1987. For more information see Fringe benefice. A history of the parish of St John and St Luke, Clay Hill, Enfield, edited by John Wright, which incorporated articles by Maire Newton.  St Luke’s church may be reached by buses 191 and W8 to Lancaster Road or W10 to Clay Hill and then up Browning Road. It is open from Wednesday to Saturday between 10am and 4pm, as well as for services. 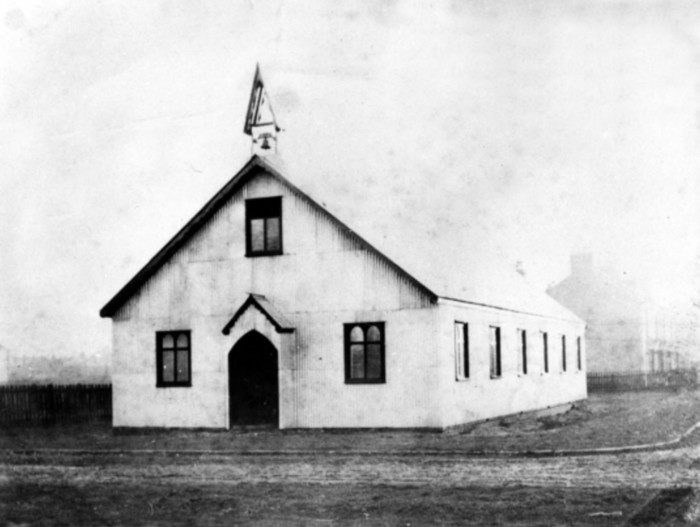 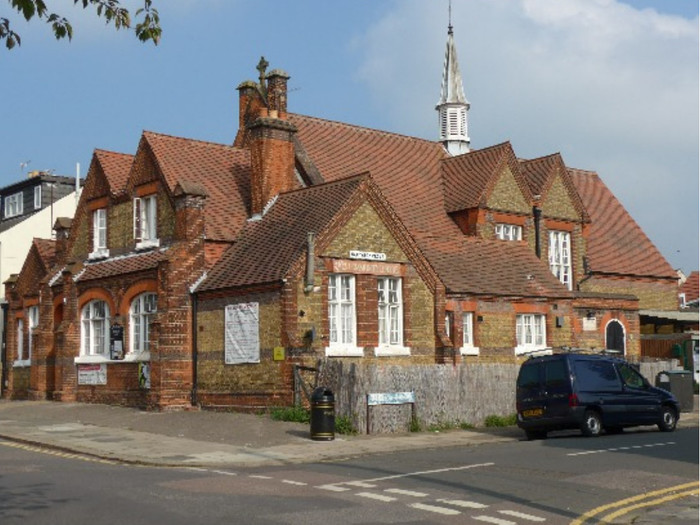 Illustrations 1, 2: In 1885 the former Christ Church mission in New Lane (now Lancaster Road) was sold and re-erected in Acacia Road as St Luke’s Iron Church. It was refurbished with a pulpit, font, reading desk, chairs and a harmonium in 1890. An iron parish room was built next to the church in 1894. St Luke’s Infants School opened in Hawthorn Grove in 1893, but closed in 1911 following the opening of Lavender Road Council School in 1910. After being used by the church and uniformed organisations the building was sold for redevelopment in 2008. In 1896 Clay Hill Parish Institute, now St Luke’s Hall, was built at the junction of Morley Hill and Hawthorn Grove. 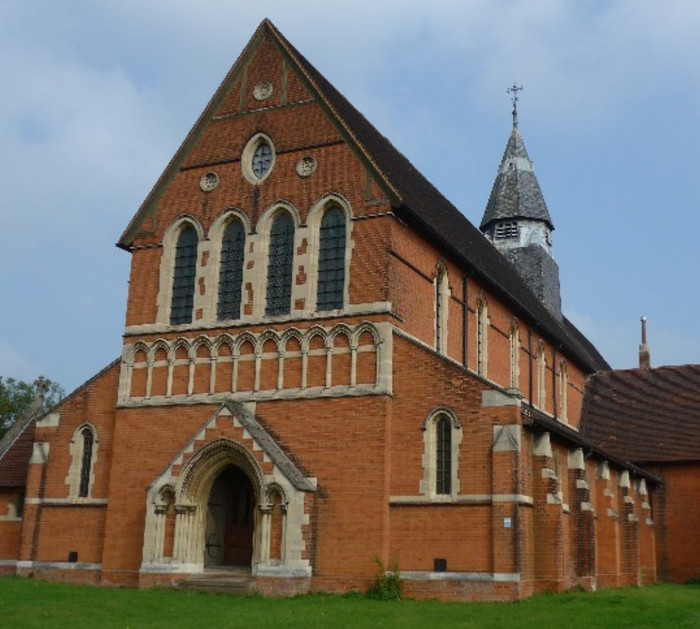 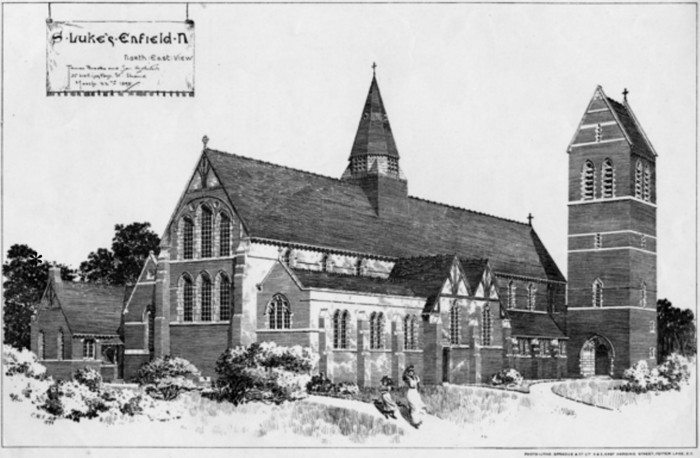 Picture courtesy of Enfield Local Studies & Archive
Illustrations 3, 4: In 1895 land at the top of Browning Road, where Brigadier Hill House had stood, was acquired for a new St Luke’s Church to hold 800 people. It was designed by James Brooks and Son in the Early English style. It was built of brick with stone dressings and had a bell turret on the roof. The foundation stone was laid in 1898 and the church was dedicated in 1899, although the nave was not completed until 1906. The total cost was £13,000. A planned detached tower with a saddle-back roof, as shown in the 1898 architects’ drawing, was not built. 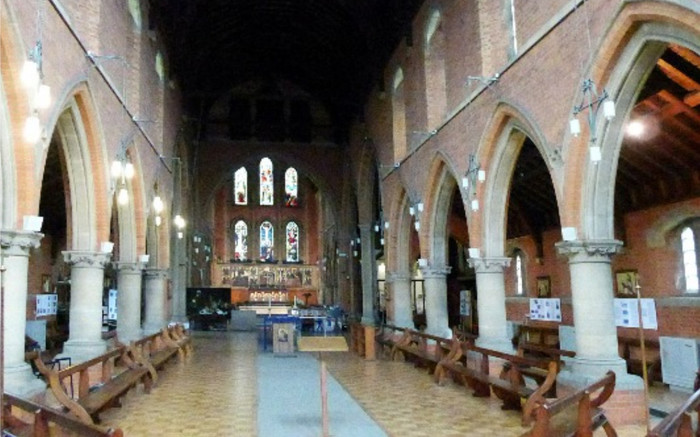 Illustrations 5, 6: The view of the interior of the completed church looking east from the nave shows the pews facing towards the chancel and high altar. A nave altar was first used in 1966, although the present small altar dates from 2012, when the pews were rearranged to face inwards. 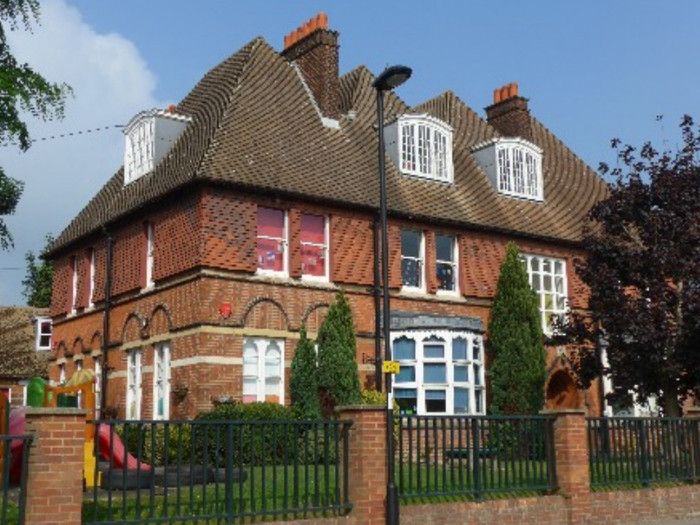 Illustration 7: The vicarage in St Luke’s Avenue, also by James Brooks and Son, was completed in 1901, at a cost of £3,000. It was sold in 1976 and was converted into flats. It later became a school and then a nursery.

Illustrations 8, 9 & 10: A statue of the Virgin and Child was placed in the Lady Chapel in 1954. In 1999 the Lady Chapel and the refectory area in the former St George’s Chapel were screened off with glass.

The 1899 stained glass window of the Crucified Christ is one of six panels in the east window of the chancel designed in the studio of Nathaniel Westlake and paid for by Miss Baring of the Manor House, High Beech. 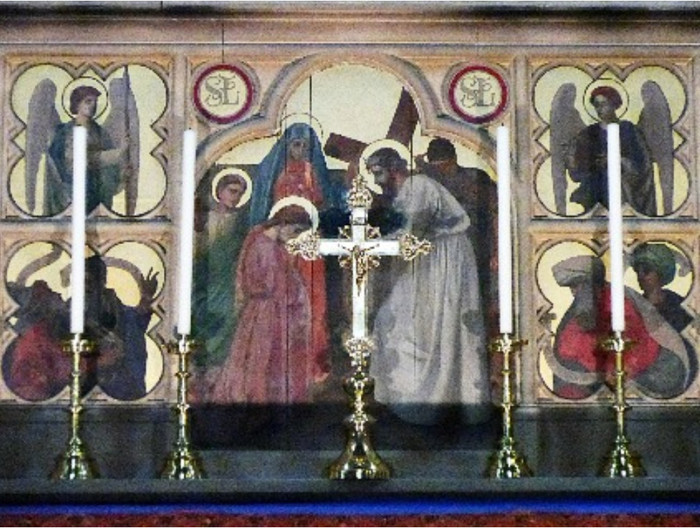 Illustration 11: The stone panelled reredos behind the high altar was also commissioned from Nathaniel Westlake and shows the Agony in the Garden, Christ carrying the Cross (illustrated here) and the Entombment. The teak altar has carvings of the four evangelists and the Adoration of the Lamb. The reredos and altar were given by Rev. Vincent Travers Macy (vicar of St John’s 1895-9 and St Luke’s 1899-1906) and his wife Susanna. 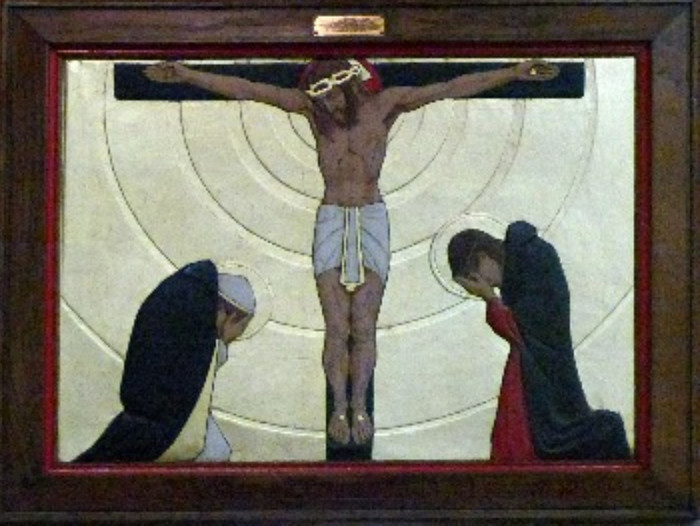 Illustration 12: The Crucifixion of Jesus is one of the 14 Stations of the Cross purchased by church members in 1949. They replaced a set installed in 1918. 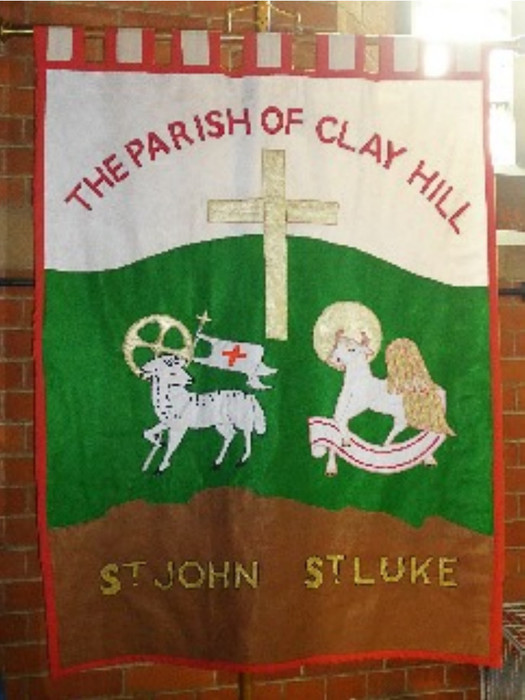 Illustration 13: The parish banner has the Lamb of God for St John the Baptist and the Ox for St Luke.