This article by Stephen Gilburt was published by the Enfield Society in newsletter 203, Autumn 2016.

The Grade II listed St John’s Church is open on Wednesdays between 10:30 and 16:00 and on Fridays beween 15:00 and 16:00. It may be reached by bus W10 which travels between Enfield Town and Crews Hill from Monday to Saturday. For more information see A guide to the church of St John the Baptist, Clay Hill, A history of Crews Hill and beyond by Roy Martin, 2007, and Fringe benefice! A history of the parish of St John and St Luke, Clay Hill, Enfield edited by John Wright, 2015. 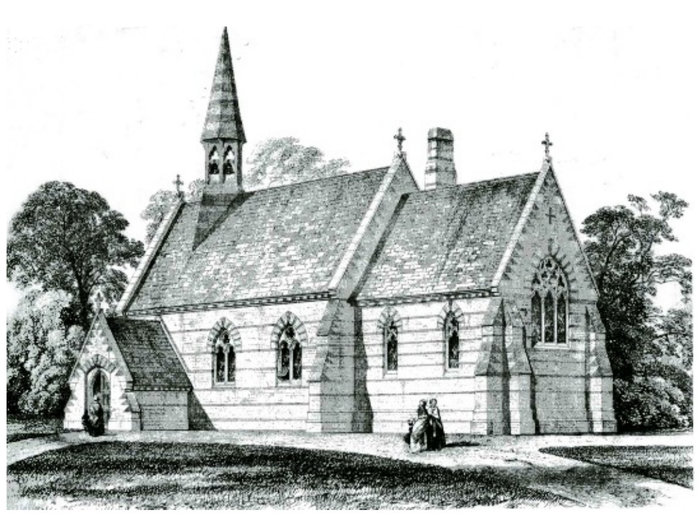 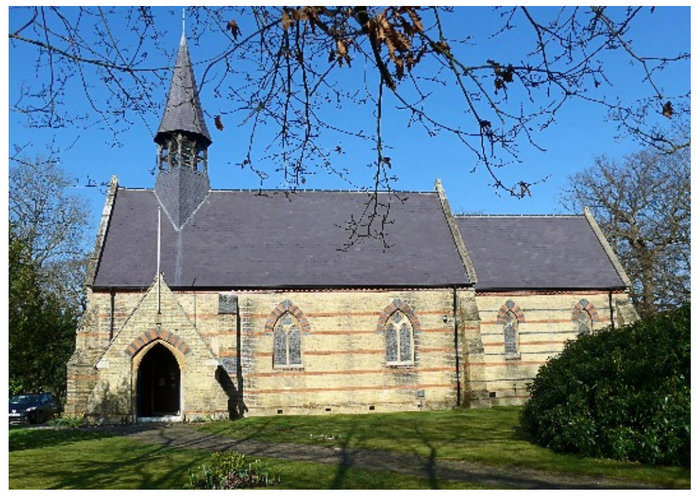 Illustrations 1, 2: St John the Baptist Church was designed in a Venetian Gothic style by James Piers St Aubyn. It was built of yellow stock brick and decorated with bands of red and blue bricks inside and outside. It has an aisleless nave, chancel, south porch and a turret on the western end of the nave. The church was completed in 1857 and opened for worship in 1858, from when the print on the left dates. Half of the cost of £1990 was paid by Rev John Moore Heath, vicar of St Andrew’s Church. Originally a chapel of ease in the parish of St Andrew, St John’s became a parish church in 1867. The vicarage in Strayfield Road was occupied by the vicars of St John’s from 1867 to 1981, when it became a private house now called Glenwood House. St John’s School was built in Theobalds Park Road in 1888, at a cost of £475. It was extended in the 1970s. A parish hall, now used by the school, was built alongside in 1889. A modern parish room was built next to the church in 2000. In 1899 the parish was divided into St John’s and St Luke’s parishes, but they were reunited in 1987. Between 2006 and 2008 St John’s church was closed for major repairs. 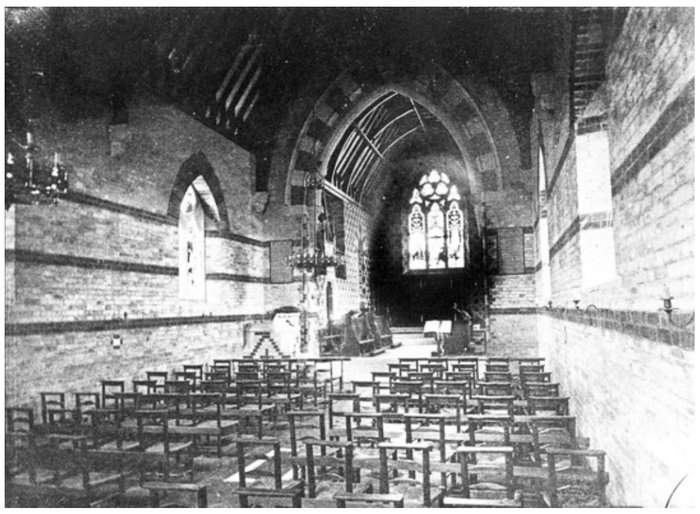 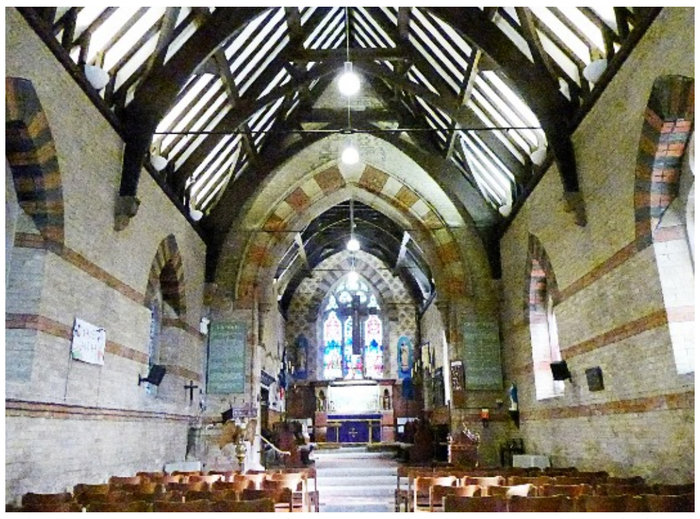 Illustrations 3, 4: The nave was originally furnished with chairs as can be seen in the photograph on the left. Pews were installed in 1875 at a cost of £100, although these were replaced in 2011 with the present chairs at a cost of approximately £100 each. 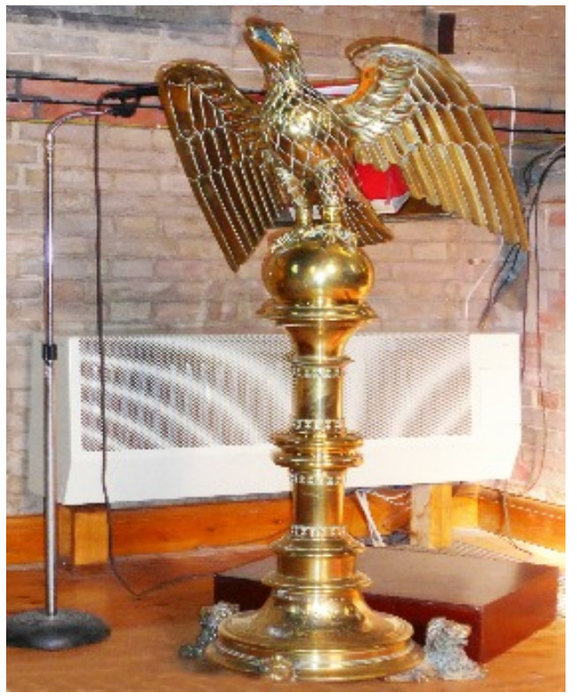 Illustration 5: The brass eagle lectern was presented to the church in 1896. 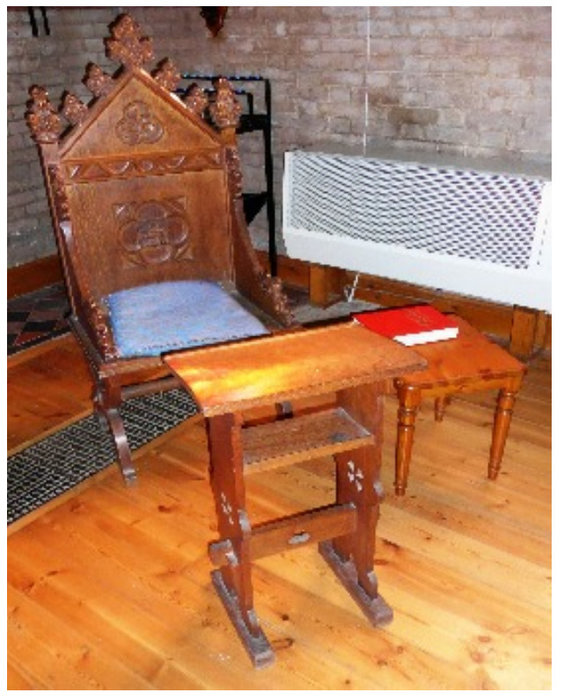 Illustration 6: The Lamb of God and a flag are depicted on the vicar’s chair, which was at one time occupied by a former vicar’s cat during evensong. 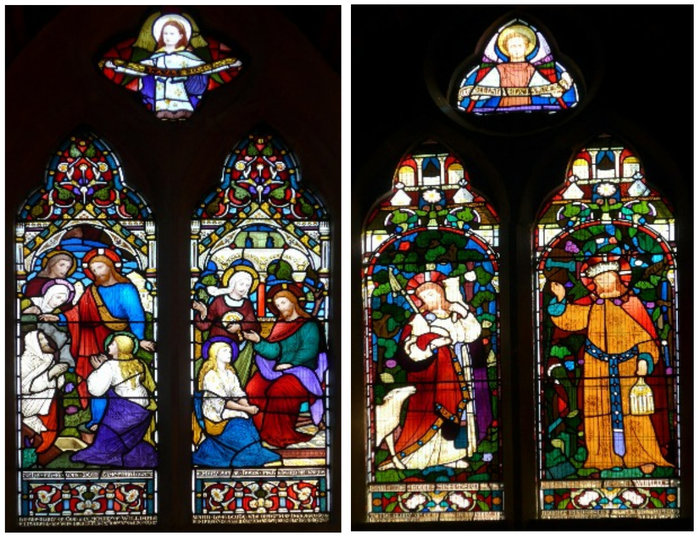 Illustration 7: Stained glass windows in the nave were designed by Robert Bayne from the firm of Heaton, Butler and Bayne, which was founded by Clement Heaton at Covent Garden in 1852. Bayne’s bearded features can often be seen in his designs. The 1870 window on the left depicts Jesus raising Lazarus from the dead, who is shown with his sisters Martha and Mary. The panel on the right shows Mary sitting listening to Jesus, while Martha is standing holding keys and a dish. The 1865 window on the right shows Jesus as the Good Shepherd and the Light of the World. 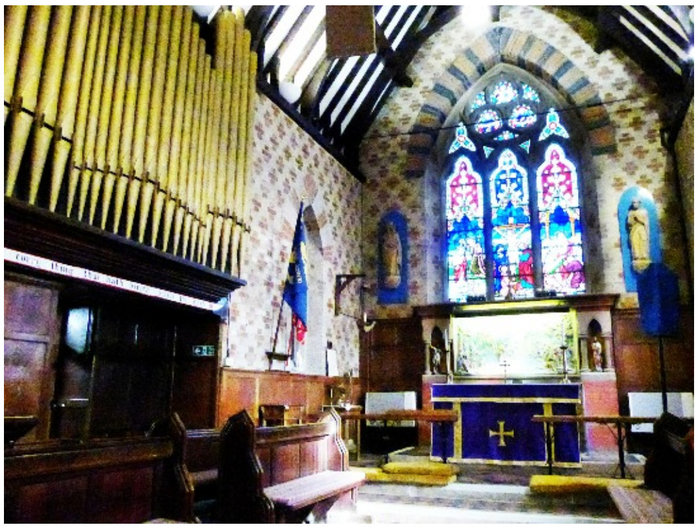 Illustration 8: The second-hand organ by Alfred Hunter and Son of London in the chancel was purchased in 1870. The visible pipes are ornamental, the working ones are hidden. Before electricity was installed in 1949, two choir boys would pump the bellows in the organ loft. The organ was restored in 1961 and again in 1986. Either side of the east window are wooden figures of Mary and Joseph. 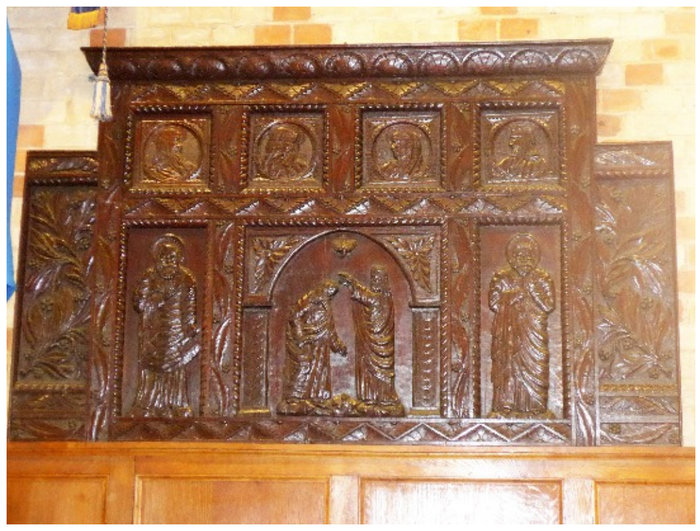 Illustration 9: The carved wood former reredos on the south wall of the chancel was brought, possibly from Cyprus or Syria, and installed in 1894. It includes depictions of a prophet (probably Isaiah), St John baptising Jesus and St Peter. 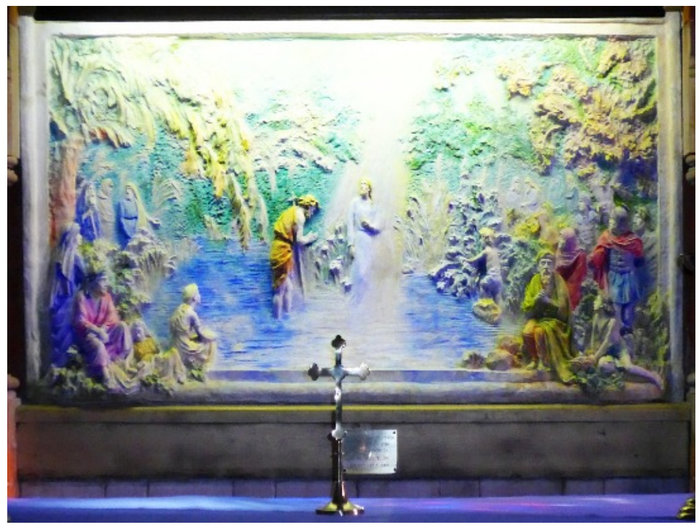 Illustration 10: The painted terracotta sandstone reredos behind the high altar shows Jesus being baptised by John in the River Jordan. Either side of the reredos are plaster statuettes of St John the Baptist and St Andrew. 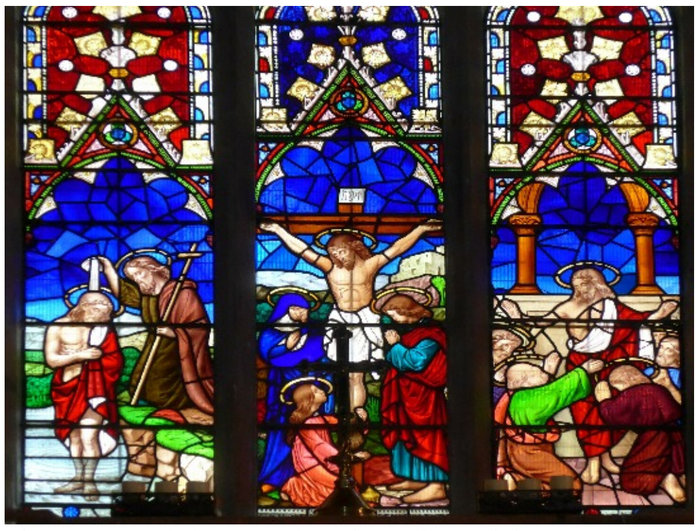 Illustration 11: The 1856 east window came from the Wailes workshop (1808-81), which was based in Newcastle-upon-Tyne. On the left is the Baptism of Jesus by John. The crucifixion of Jesus in the centre also shows Mary the mother of Jesus and the disciple John with Mary Magdalene sitting at the foot of the cross. On the right the risen Christ appears to his disciples.