This article by Stephen Gilburt was published by the Enfield Society in newsletter 213, Spring 2019.

The Grade II★ listed late 16th century three storey Salisbury House is the only remaining historic building in the former hamlet of Bury Street, which was the most northerly settlement in the parish of Edmonton. Other major houses in the hamlet, including Bury Hall, Warren Lodge and Bury House, have long since been demolished and the two public houses, the Stag and Hounds and the Beehive, were rebuilt in 1925 and 1936 respectively. The surrounding area was developed with private houses in the 1930s.

It has been suggested that the origin of the name of Salisbury House may be linked to the Cecil family, who were Earls and later Marquesses of Salisbury and who owned property, including Pymmes, in Edmonton. Alternatively the name may be a corruption of the former Sayersbury estate which was in the Bury Street area. However the available evidence makes both these ideas unlikely.

Salisbury House was originally larger than the present building and had an entrance under a gable on the east side. It was linked to the late 16th century Bury Lodge and was surrounded by a moat, which was filled in at the end of the 19th century.

The building is timber framed with jettied upper storeys of lathe and plaster covered with rough cast and timber weatherboarding. Access to the upper storeys is via a polygonal stair turret built of brick for the ground floor with the upper floors being timber framed. The basement has a 16th century moulded doorcase and a possible priest hole using a false chimney for ventilation. The ground floor has 18th century panelling and was originally divided into a parlour on the north side and a hall on the south side. Timber panelling in the first floor rooms dates from 1625.

Apart from a brief period in the late 19th century, when it was used as a private boys school, the house remained in residential use until it was sold to Edmonton Urban District Council in 1935 for £4,500. The sale included the adjoining Bury Lodge, which was demolished in 1936, and two acres of land down to Salmons Brook. The grounds were laid out as Bury Lodge Recreation Ground.

There were plans, which were never carried out, to establish a museum in Salisbury House and later to convert it into flats. By 1956 the condition of the building had deteriorated and demolition was proposed. However only the south wing was demolished and the remainder of the house was restored with the aid of a grant from the Ministry of Works. It opened as an arts centre in 1957 and has since been used for a variety of activities including meetings, classes, talks, and exhibitions. A new single storey structure was added at the rear, this provided a pottery room and a music practice room. After closure for further restoration the house reopened in 1992. It now houses Art Start and there is a café on the ground floor at the rear. The main hall, Edinburgh room and Tudor suite on the top floor as well as the garden are all available for hire—telephone 020 8887 7333 for details.

Salisbury House may be reached by the 192 bus and routes along Village Road and the Great Cambridge Road and then on foot along Bury Street West. The Enfield Society would like more people to be able to visit the house and for more groups to use it for their activities.

For more information on Salisbury House see a letter in Country Life edition of 21st December 1901; a 1907 sales notice for “The quaint Elizabethan residence known as Salisbury House”; Salisbury House, Bury Street West N9 by wck 1973; Salisbury House by Graham Dalling 1992; Salisbury House, a handful of memories by Penny Wilkinson 1993 and The Buildings of England London 4 North by Bridget Cherry and Nikolaus Pevsner 1998. All may be consulted at Enfield Local Studies Library and Archives which also provided all the illustrations used in this article. 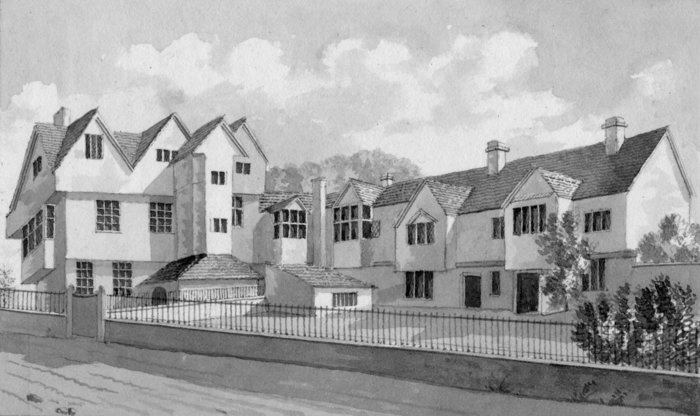 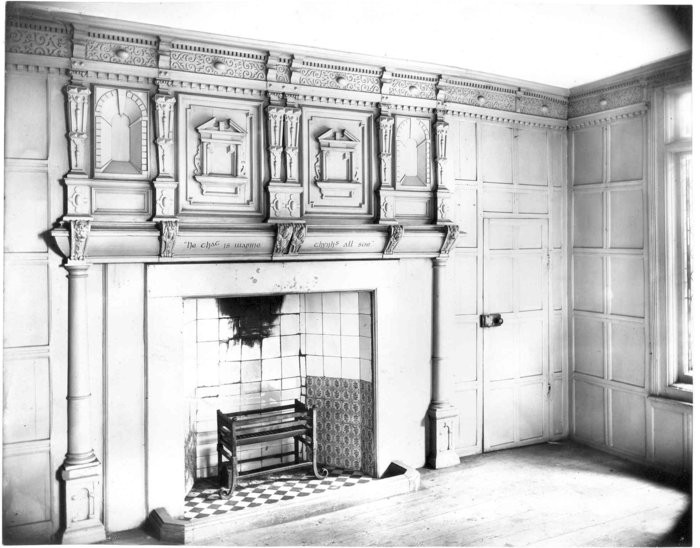 Illustration 6: This 1625 carved wood overmantel and panelling were sold to the Royal Scottish Museum in 1907. They were returned, on loan from the Royal Museums of Scotland, and installed in 1992 in the newly restored Edinburgh Room on the first floor. The painted words over the fireplace read “He that is warme thynks all soe”. 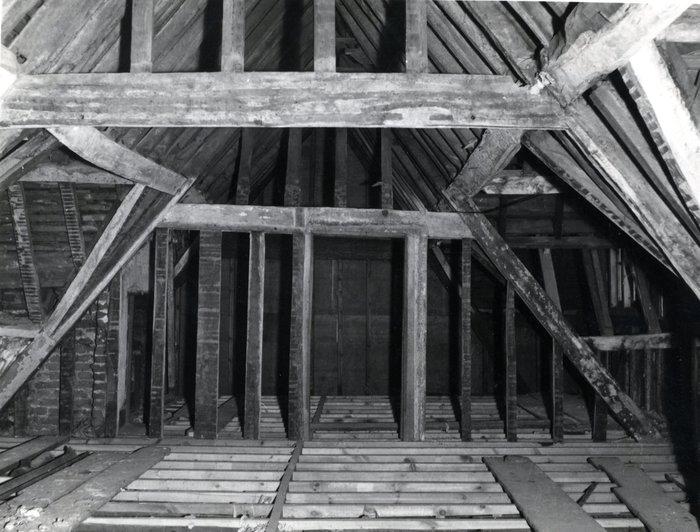 Illustration 7: The top floor showing the timber-framed internal wall and roof during renovation in 1957. 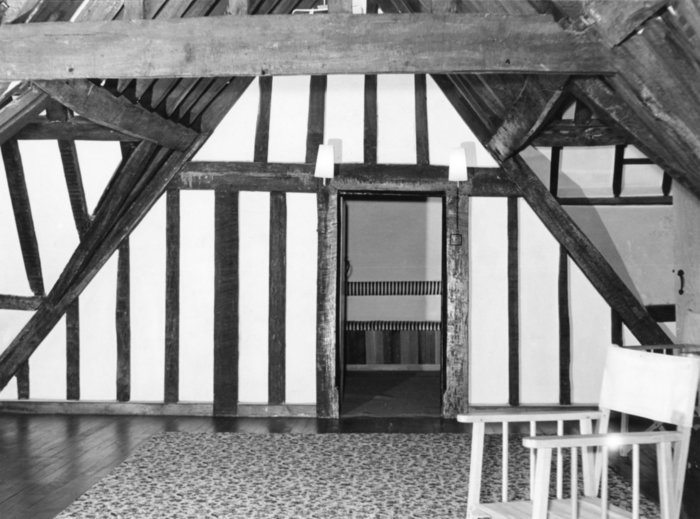 Illustration 8: The top floor, after restoration in 1957. It was used to serve refreshments to those attending activities in the arts centre. 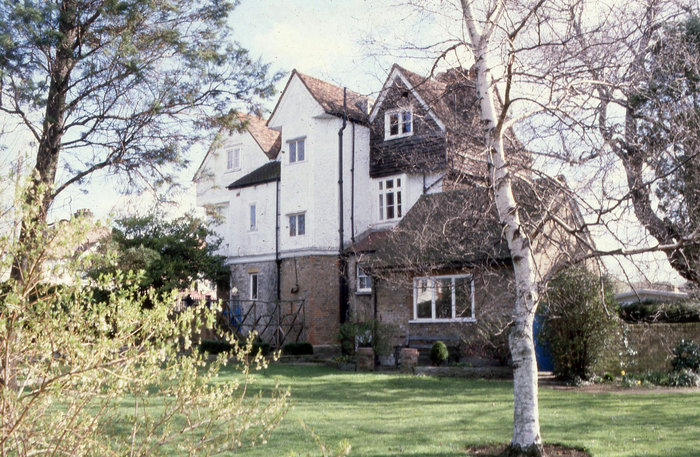 Illustration 9: View from the south-west, after the 1991/2 renovations were completed. In the centre is the polygonal stair turret. On the right is the 1957 single storey extension. 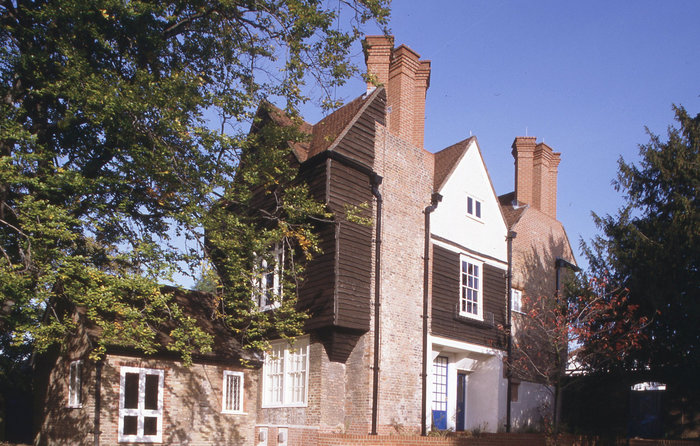 Illustration 10: View from the south-east, after the completion of the 1991/2 renovations. The original entrance to the house was between the two brick chimneys. It became a window when the present entrance was constructed.
Bookmark the permalink.