This article by Stephen Gilburt was published in The Enfield Society newsletter issue 207, Autumn 2017.

St Stephen’s Church may be reached by bus 329 or W8 to the junction of Park Avenue with Village Road. For more information see From fields to flats. A history of Bush Hill Park and St Stephen’s Church by Denis Hoy, published in 1984 and revised in 1998. This book may be consulted at the Enfield Local Studies Centre and Archive. 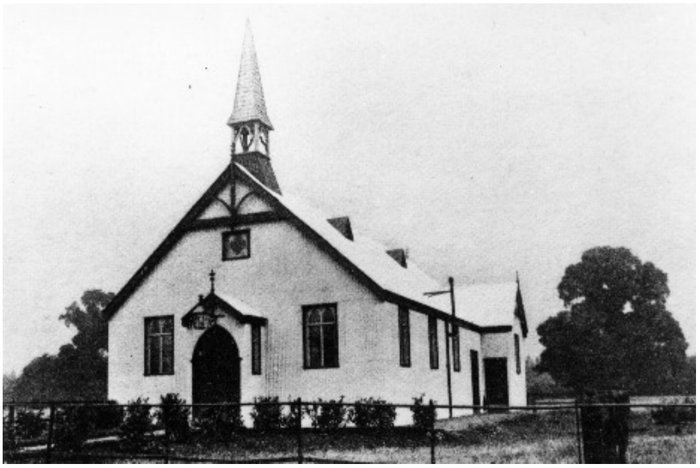 Picture courtesy Enfield Local Studies & Archive
Illustration 1. Until the late 19th century Bush Hill Park was a rural area in the parish of Edmonton, although it had been divided by a branch railway line constructed in 1849 from what is now Angel Road, Edmonton, to Enfield Town. In the 1870s the first estates west of the railway were sold for development. The first “rustic bijou villas” in Wellington Road and Village Road were completed in 1878. These were large detached houses with middle class inhabitants. Following the opening of a railway station at Bush Hill Park in 1880, further estates were developed. Around 1890 small terraced houses were built in the Avenues east of the railway. They were mainly occupied by members of the working class. To meet the religious needs of the growing population, St Mark’s Anglican (1893), Salvation Army (1902), Methodist (1905) and Congregational (now United Reformed) (1910) places of worship were built. A temporary Iron Church (St Stephen’s) was opened in Park Avenue in 1901 as a chapel of ease to All Saints Parish Church, Edmonton. It was heated by a solid fuel stove, the flue for which can be seen at the side.

Right picture courtesy Richard Barnard
Illustrations 2, 3 & 4: In 1906 work began on a permanent church to a gothic design by John S. Alder. The walls were built of Stamford stone, with Welden stone for the corners, Bath stone for the windows and pillars and York stone for the steps. The church was to be lit by electricity. The first part, comprising the chancel, morning chapel, organ bay, clergy and choir vestries and three bays of the nave and aisles, was completed in 1907 at a cost of £6,000. The consecration by the Bishop of London is illustrated in the picture postcard. In 1909 St Stephen’s became a separate parish. Completion of the church, which in 1912 was estimated to cost a further £4,800, was delayed by the First World War. The nave was finished in 1916, but the tower and spire, shown in the 1904 architect’s drawing, were never built. The lychgate, which also served as a war memorial, was unveiled in 1922.
Illustrations 5, 6 & 7: The architect’s drawing and picture postcard of the interior show the nave and chancel as planned and when newly completed. The organ was installed in 1908 at a cost of £1,150. The organ case was given in memory of the first vicar’s father. 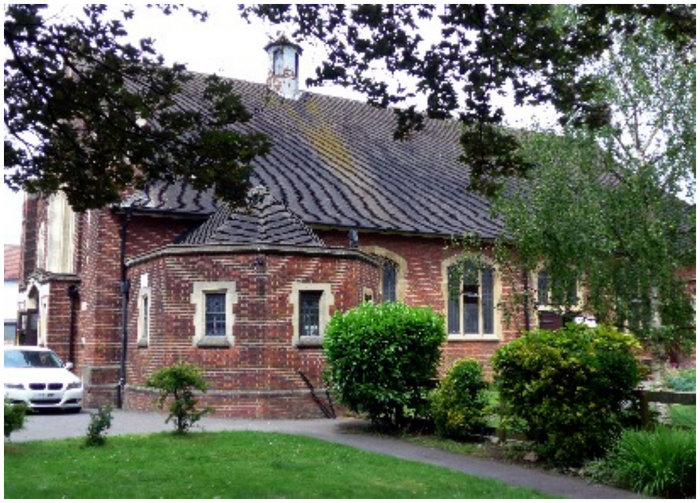 Illustration 8: Following the opening of the permanent church, the Iron Church was converted into the church hall in 1907. In 1925 it was demolished and replaced with the present church hall. This was built of brick with stone dressings around the windows and doors. It opened in 1926 and cost a total of £9,515. 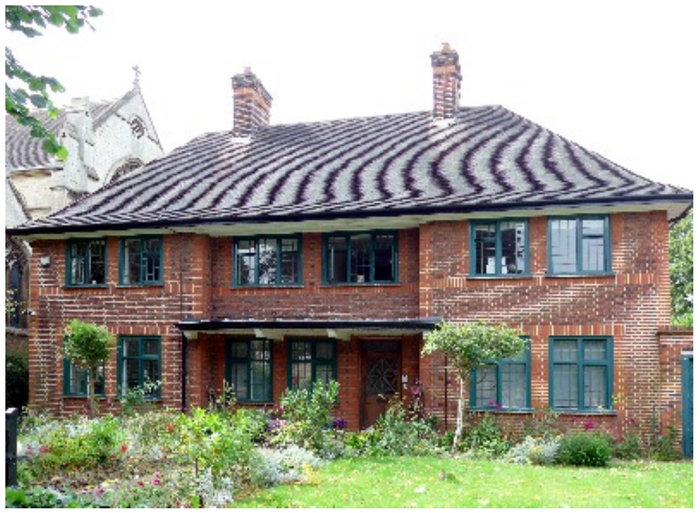 Illustration 9: The first vicar lived in a 1901 semi-detached house in Village Road. In 1935 a new vicarage was built in Village Road, adjacent to the church, at a cost of £3,500. It had a dining room, drawing room, study, kitchen, five bedrooms, bathroom and toilet.

Following improvements to public transport, with the extension of the electric tram route from Winchmore Hill to Enfield Town in 1909, the New River Estate was developed in the inter-war period. The first houses in Sittingbourne Avenue and Faversham Avenue were occupied by 1926 and Bush Hill Park was fully developed by 1935. 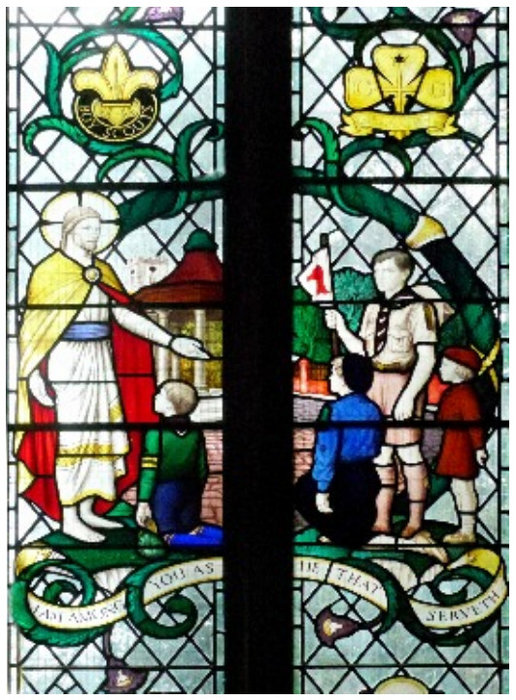 Illustrations 10: This 1952 window celebrates 25 years of Scouting and Guiding in St Stephen’s parish. It shows a cub scout, a guide, a scout holding the Eagle patrol pennant, and a brownie, all facing Christ. In the background are Enfield Town market house and the tower of St Andrew’s church. Above are scout and guide emblems while at the bottom are the words “I am among you as he that serveth”. 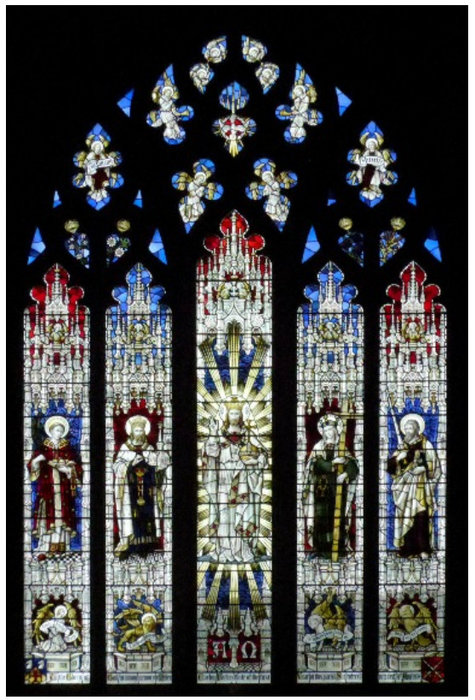 Illustration 11: The east window was installed in 1946, as a memorial to the wife of the first vicar, Mrs Helen Forbes, who died in 1938. In the centre is the risen and ascended Christ with his right hand raised in the act of benediction and holding the regal symbol of an orb with a cross. Above are angels and a dove representing the Holy Spirit, while below are alpha and omega, the first and last letters of the Greek alphabet.

On the far left is St Stephen, the first Christian martyr, to whom the church is dedicated. He is shown wearing the robes of a deacon and holding a martyr’s palm and a Gospel book on which are the stones used to kill him. Next is St Edward the Confessor, King of Anglo-Saxon England. He is shown wearing a crown and holding a ring and a model of a church, symbolising Westminster Abbey which he founded. On the right is St Helena, mother of the first Christian Roman Emperor, Constantine. She is holding the True Cross, which she claimed to have discovered in Jerusalem. On the far right is St Paul, holding a sword, the emblem of his martyrdom, and a book containing his letters to the early Christians. Below the saints are the four creatures recorded in Revelation, chapter 4 verse 7 – a lion, a bull, a human face and an eagle in flight, standing for the four Gospel writers. 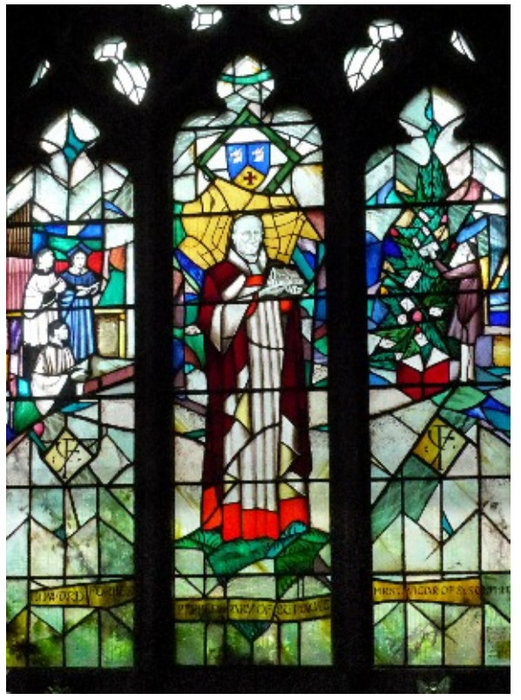 Illustration 12: The 1969 Youth Fellowship window shows young members of the church choir on the left with envelopes containing gifts being placed on a Christmas tree on the right. In the centre Prebendary Edward Forbes, curate and later vicar between 1901 and 1935, is shown holding a model of the church.
Bookmark the permalink.