Historic Buildings of Chase Side, Enfield

This article by Stephen Gilburt was first published by The Enfield Society in newsletter 223, Autumn 2021.

Enfield Chase was a hunting ground from 1138 and occupied much of the western part of the parish on Enfield. It was owned in turn by the de Manderville and de Bohun families until it came under the control of the Crown. It was then enclosed following an Act of Parliament in 1777.

The eastern edge of Enfield Chase ran just to the east of Chase Side. The boundary can be seen in Gentleman’s Row. Many of the 16th to 19th century houses were outside the Chase whereas the front gardens on the other side of the footpath and other houses were encroachments constructed on land which had been cut off from the Chase by the early 17th century New River (see newsletter 190, Summer 2013 on Gentleman’s Row and the New River).

Further north the boundary of the Chase can be seen in the footpath which runs from the Crown and Horseshoes up to Chase Side and then along Nunns Road, Chase Side Crescent and Bately Road. As Enfield Town expanded, individual houses and terraces were constructed along Chase Side in the 17th, 18th and 19th centuries. Many of the earlier ones are listed Grade II and are included in the Enfield Town Conservation Area which extends along the southern half of Chase Side. 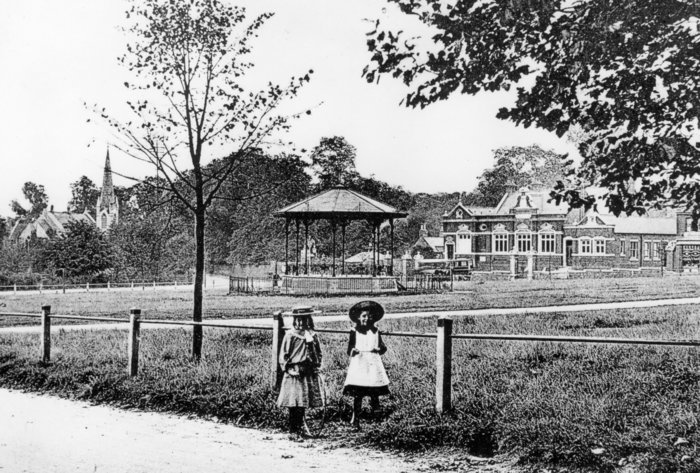 Illustration 1. In 1899 Chase Green, which was a small part of the former Enfield Chase, was transferred from the Vicar and Churchwardens of St Andrews Church to Enfield Urban District Council. This 1900 view shows the newly constructed bandstand, which was replaced by the Enfield War memorial in 1921. In the background is H.T. Wakelam’s Magistrates Court built of red brick with stone dressings in 1900 at the bottom of Windmill Hill. On the left is the 1889 stone Gothic style Enfield Methodist Church by F. Boreham, which is now Trinity Methodist and United Reformed Church. 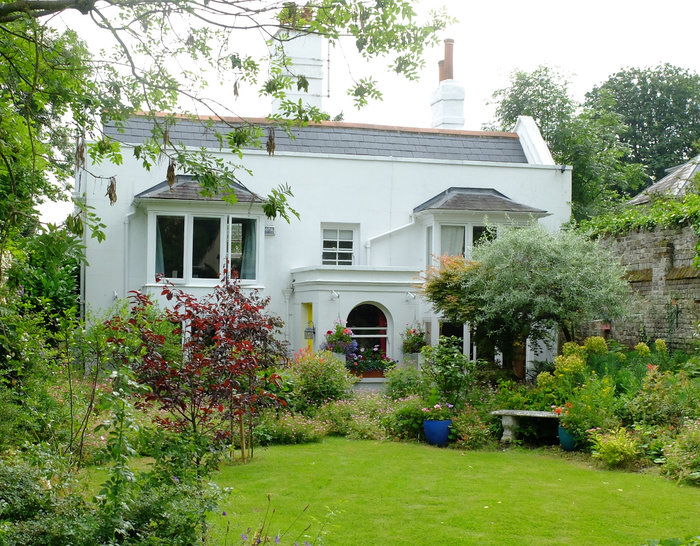 Illustration 2. The Laurels, River View is a Grade II listed 17th century timber framed house with an early 19th century stucco front with a parapet. The Central porch has a round- headed window above the door and is flanked by two two storey square bays. Access is via a white painted wooden bridge over the New River. 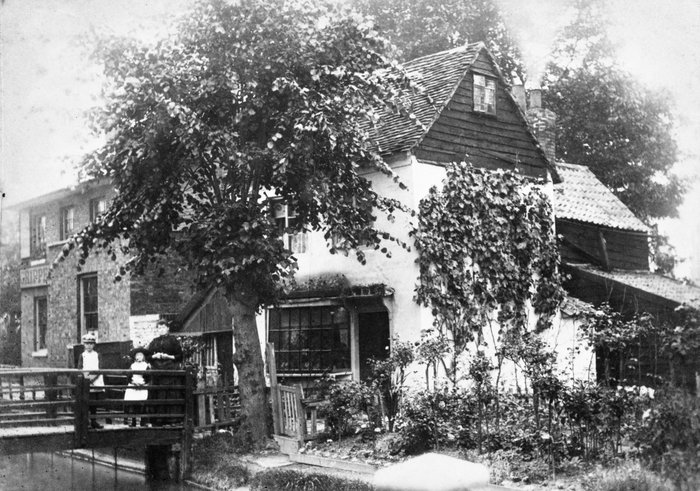 Illustration 3. The Crown and Horseshoes public house in River View is first recorded in 1716. The original building was a white wooden boarded structure with a circular bay at the front. The present early 19th century Grade II listed two storey brick structure with a low pitched slated roof is shown in this photograph taken about 1900. In the mid 19th century the premises also included a wash house and yard with, on the other side of the New River, a courier’s shop, cart house, stables, barn and a small brewery. The former brewery was replaced by Danby Court, sheltered housing by Neylan and Unglass, in 1974-8. Danby Court was named after Benjamin Danby, a local murder victim in 1832. 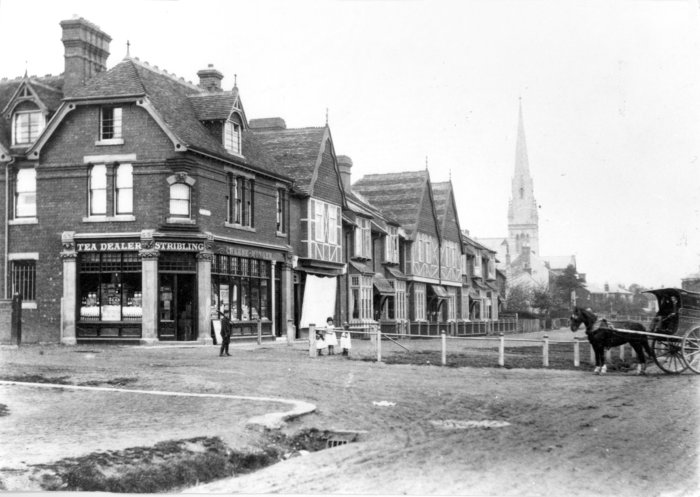 Illustration 4. This view from around 1900 is looking north along Chase Side towards Christ Church Congregational Church, which was built in 1874-5. Stribling’s grocers shop is on the corner of Chase Green Avenue. Members of the Stribling family attended Christ Church. 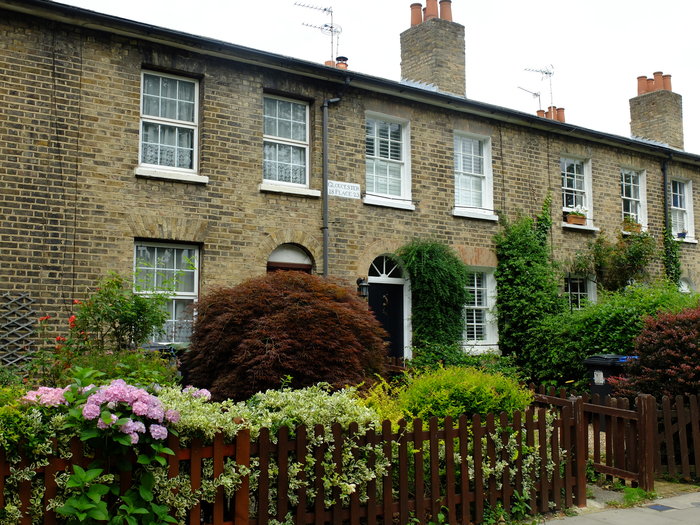 Illustration 5. The Grade II listed Gloucester Place Cottages, 22-36 Chase Side were built in 1823. This terrace of eight two storey workers’ cottages was constructed of yellow stock brick with slated hipped roofs. The sash windows have retained their glazing bars and some of the rounded arched doorways still have fanlights. 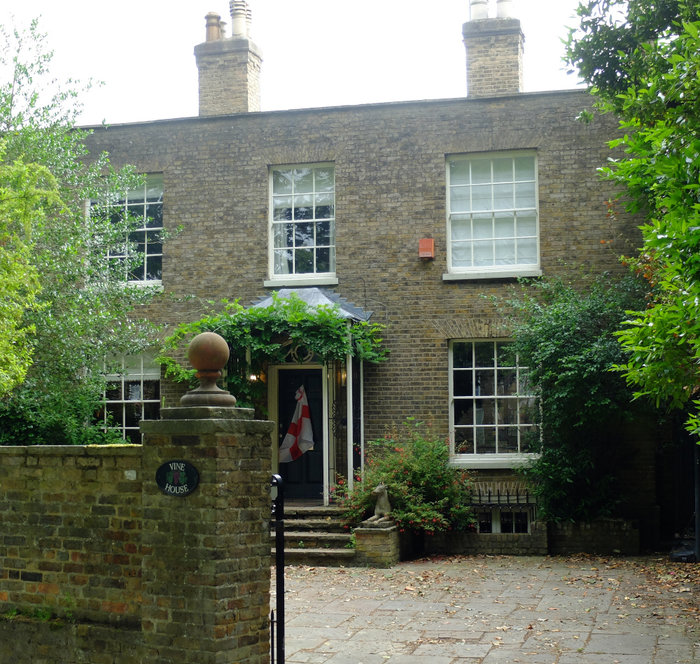 Illustration 6. The Grade II Vione House, 77 Chase Side is an early 19th Century two storey stock brick three bay villa with a parapet. The arch above the front door has a patterned fanlight. The wide columned porch has palmette decoration. 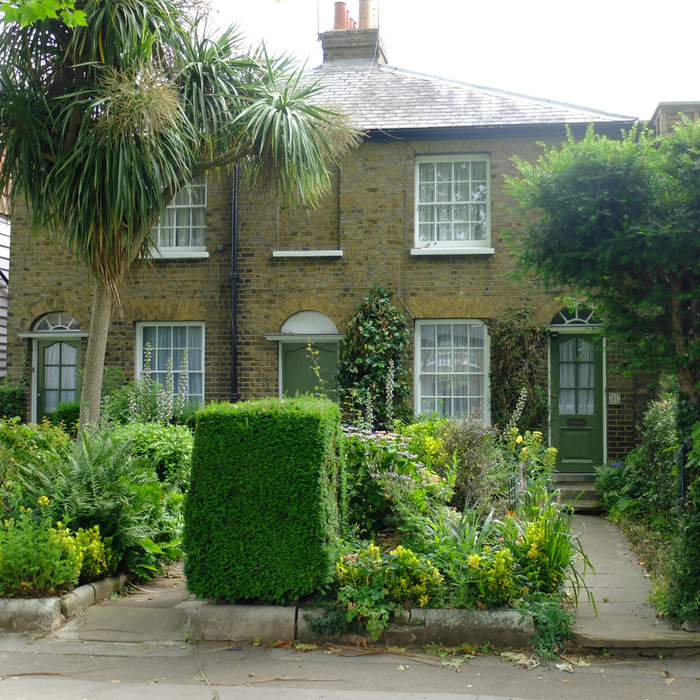 Illustration 7. Nos. 81 and 83 Chase Side are two, possibly originally three, Grade II listed 19th Century yellow brick dwellings. There are fanlights above the two front doors in use. 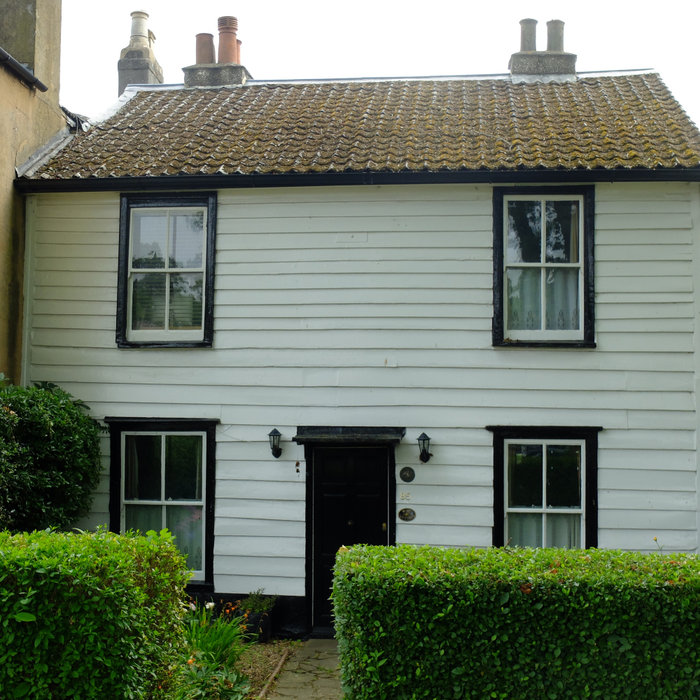 Illustration 8. No. 85 Chase Side is a Grade II listed 18th century weatherboarded cottage. The six panel door is topped by a bracketed flat hood. The box framed windows and asbestos roof tiles are later replacements. 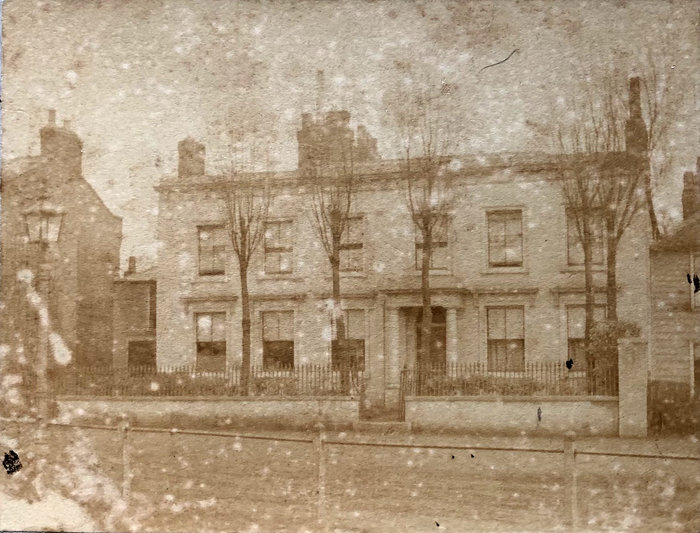 Illustration 9. The Grade II listed Poplars at 87 Chase Side was built in the early 19th century. After his retirement in 1827, the essayist Charles Lamb moved there with his sister Mary and ward Emma Isola. He described Poplars as “the prettiest, compactest house I ever saw”. Thomas Westwood, who lived next door, recalled “I saw a group of three issuing from the gambogey-looking (yellow) cottage close at hand, a slim middle aged man in a quaint uncontemporary habitments, a rather shapeless bundle of an old lady in a bonnet like a mob cap and a young girl, while before them bounded a riotous dog (Thomas Hood’s Dash) holding a board with “This house to let” in his jaws.”

The photograph dates from between 1865 and 1887 when Poplars was occupied by the Revd. Henry Storer Toms, his wife Caroline and their family before they moved to a newly-built behind Christ Church.

It has since been considerately altered with the removal of cornices, the replacement of the sash windows with casements and the construction of an extension to the left. 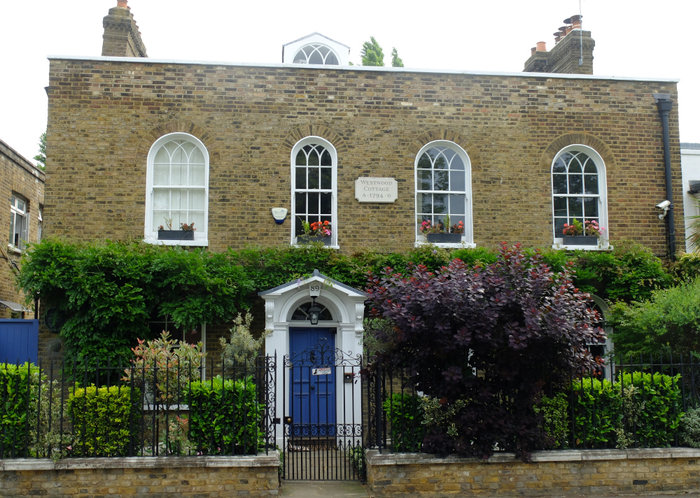 Illustration 10. The Grade II listed Westward Cottage, 89 Chase Side dates from the early 19thcentury. It was built of stock brick with a stone capped parapet and has one gabled window in the slated roof. The sash windows have round brick arches. The fine door case has an open pediment resting on scroll bracketed cornices. The fanlight above the door is set in a moulded frame.

Between 1829 and 1833 the Lambs lived here with Thomas Westwood. This was to reduce the pressure on Mary who suffered a series of mental breakdowns while in Enfield. (For more information on Charles Lamb in Enfield and Edmonton see Newsletter 182 Summer 2011) 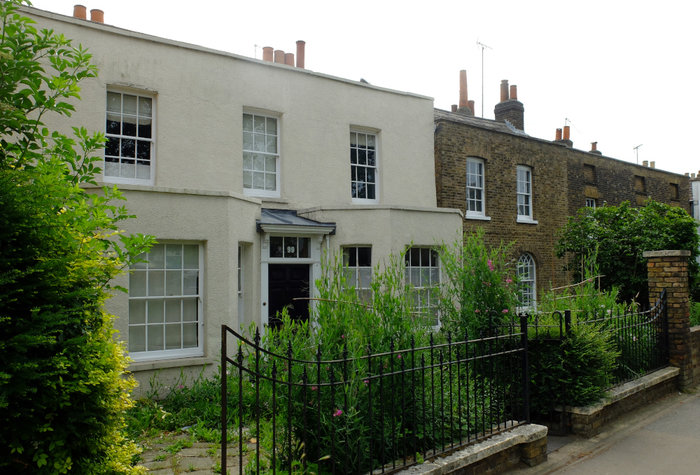 Illustration 11. The Grade II listed 93-99 Chase Side were probably built in the 17th century with timber frames. Stock brick facades with stone capped parapets were added in the early 19th century. Number 97 has a fanlight with interlacing bars matching the ground floor sash window. 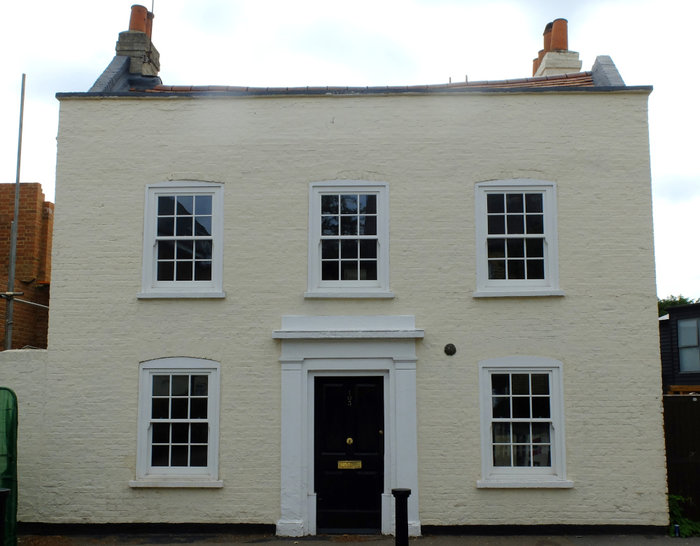 Illustration 12. Number 103 Chase Side is an early to mid 18th century Grade II listed two storey house with a painted brick front. The four panelled doors and surround are 19th century. Behind the stone coped parapet are modern tiles on the high pitched roof.