This article by Stephen Gilburt was published in Enfield Society newsletter 197, Spring 2015.

At the time of the Norman Conquest in 1066 the manor of Enefelde (which may mean Eana’s open space) was held by the Anglo-Danish nobleman Ansgar. His lands were given by William the Conqueror to Geoffrey de Mandeville, who still held Enfield in 1086, when according to the Domesday survey there was arable land for 24 plough teams, woodland for 2,000 pigs, a water mill on the River Lea and fishponds.

Domesday mentions a priest at Enfield, but the first written record of St. Andrew’s parish church is in 1136 and the first vicar was appointed in 1190. The earliest parts of the present church probably date from the late 12th or early 13th centuries, although most of the present building was erected between the 14th and 16th centuries. 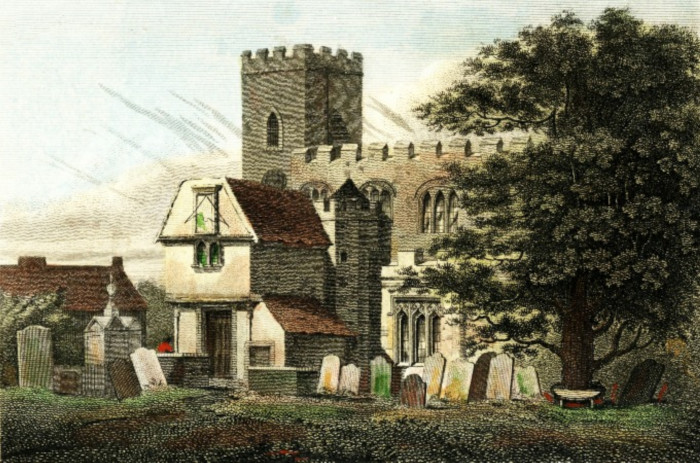 Illustration 1: shows the church in 1813 before the muniment room over the south porch was demolished and the south aisle was rebuilt in 1824. (See TES News no. 189).

The first reference to a manor house in Enfield dates from 1347 when Humphrey de Bohun was licensed to fortify. By 1437 there was a substantial building on a seven acre site where Palace Gardens shopping precinct now stands. In 1551 the manor of Enfield was granted by Edward VI to his half-sister Elizabeth and Enfield Manor House was largely rebuilt to become Enfield Palace. There is however no record of Elizabeth staying at the Palace. When her court visited Enfield she would have probably stayed at the larger Elsyng Palace (near Forty Hall). Later in the 16th century Enfield Palace was leased out, and by the late 17th century housed a boarding school. 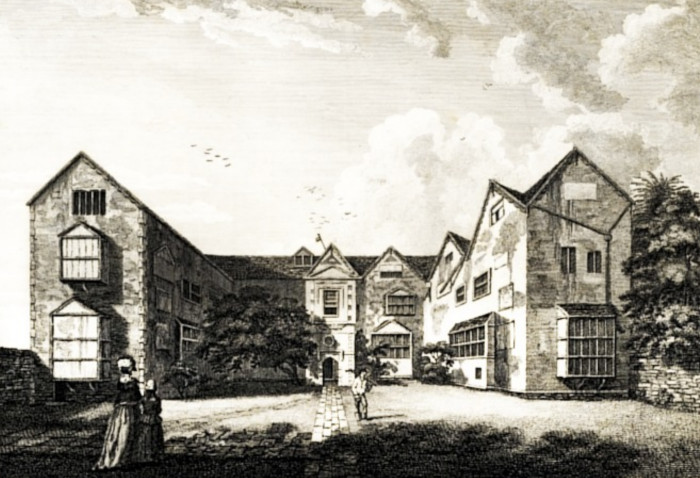 Illustration 2: the west front of Enfield Palace in 1778 is based on a print of 1568. Much of the building was demolished in 1791-2 and the remainder in 1927. Sections, principally from the Oak Room, were salvaged and incorporated into the Tudor Room built next to Little Park in Gentleman’s Row. (See TES News no. 186). Enfield Grammar School was founded in 1558 to teach the children of the poor of Enfield to read and write Latin and English. There had however been a school next to St. Andrew’s Church since at least the early 16th century. The present Tudor school building was completed in 1597 and a master’s house was added alongside in 1748-9. 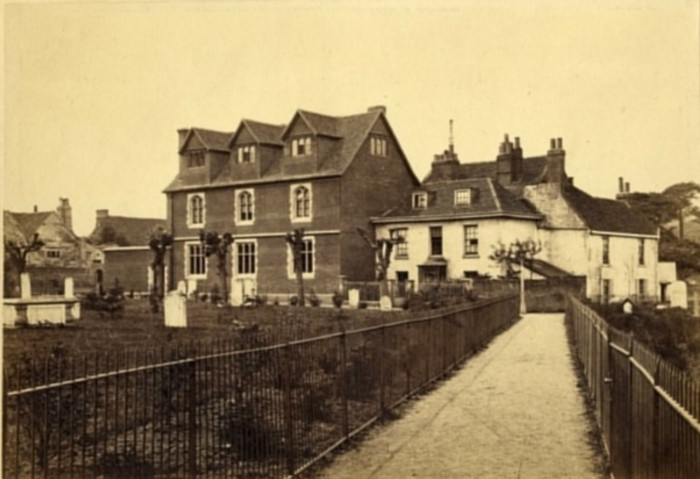 Illustration 3: this 1880 photograph shows the restored school after Georgian windows had been replaced with the present neo-Tudor ones. The late 14th century Prounces House, which had been the first schoolmaster’s house, is on the far left. A new house for the headmaster was built in 1883 and the school was subsequently extended in 1894 (on the site of Prounces House), 1909, 1938-9 and the early 1970s. Enfield Court was opened as the Lower School in 1925. (See TES News nos. 191 and 192).

The Lord of the Manor of Enfield was granted approval to hold a weekly market in 1303, although the present market traces its origin to an early 17th century charter which also gave the parish approval to hold an annual fair. There was, however, no regular market between about 1800 and 1870. 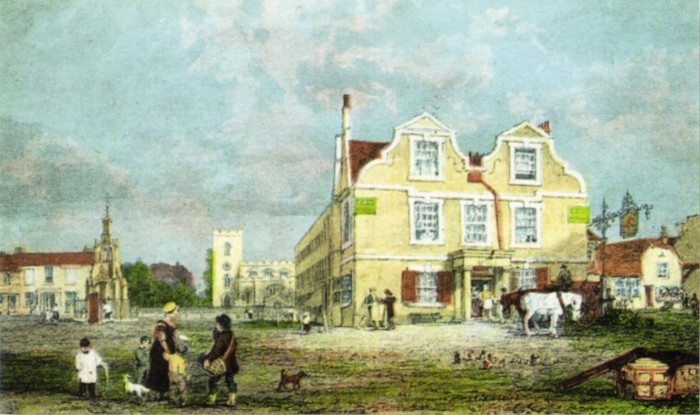 Illustration 4: The market place in 1827 shows the mid-17th century King’s Head inn on the left. In the 1740s Enfield’s assembly met in a 17th century building (at the back of the King’s Head) which was demolished in 1939 for an extension to Enfield Grammar School. (See TES News no. 191). Before the construction of a branch railway line from Angel Road, Edmonton, to Enfield Town in 1849, a horse-drawn coach left from outside the King’s Head for the city of London three times a day. The 1826 market cross was dismantled in 1904 and moved to Myddelton House rose garden. (See TES News no. 183).

The early 17th century Greyhound inn with its Dutch gables overlooked Enfield Green with its oak tree until the 19th century. After 1860 the inn was used as local government offices and as a court house. 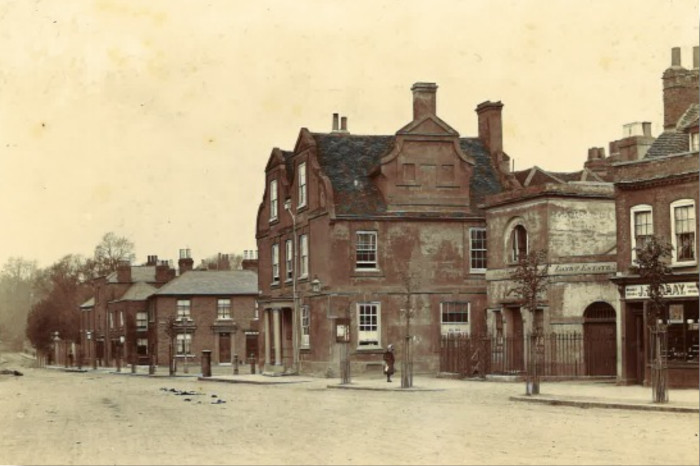 Illustration 5: from around 1890 is the former beadle’s office with two lock-up cells, erected in 1830. From 1840 it served as Enfield’s first police station until a larger building was opened in 1872 at the junction of London Road and Cecil Road. The present King’s Head of 1899, by Shoebridge and Rising, has tile-hung upper storeys and half-timbered gables. In 1897 the former Greyhound was replaced by W. Gilbee Scott’s Flemish Renaissance style London and Provincial Bank (now Barclays Bank). The market house by Sidney M Cranfield was erected in 1904 to commemorate Edward VII’s coronation in 1902. 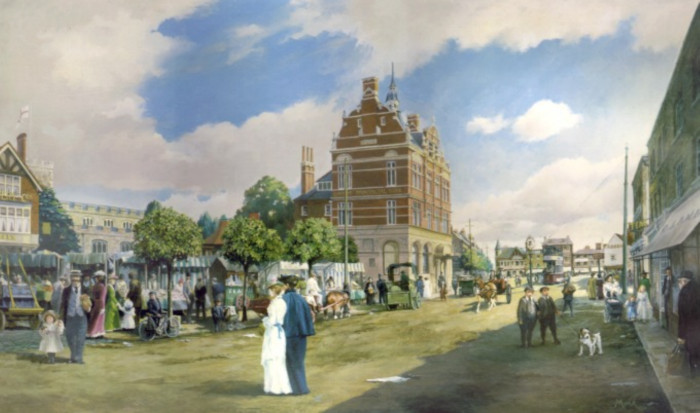 Illustration 6: This 1980 print by George Monk shows what Enfield Town and its market might have looked like in 1910, the year after the electric tram reached Enfield from London.

Those historic buildings referred to in this article which are still standing are listed either nationally or locally and are included in the Enfield Town conservation area. This was originally established in 1968 to protect Gentleman’s Row and was extended in 1972, 1983, 1984 and 1997 to cover the historic centre of Enfield Town from Parsonage Lane in the north to Essex Road in the south and from Chase Green in the west to Genotin Road in the east.

For more information on Enfield’s history see David Pam’s booklet Enfield Town, village green to shopping precinct, published by the Edmonton Hundred Historical Society in 2007 and his comprehensive three volumes of A history of Enfield which are available from the Enfield Society. Monica Smith has recently written volume four, entitled A time of change which covers the period form 1939 to 1969. The most useful one volume histories are Graham Dalling’s Enfield past, The Enfield book and Southgate and Edmonton past.

A wide range of prints, photographs, maps, newspapers and books (including those listed above) may be consulted at the Enfield Local Studies Centre and Archive, which also provided some of the illustrations used in this article.