From River Lea to Lee Navigation

This article by Stephen Gilburt was published in The Enfield Society newsletter issue 208, Winter 2017.

The River Lea rises near Luton, flows through Hertfordshire, and then follows a course which historically marked the boundary between Hertfordshire and Middlesex to the west and Essex to the east, until it finally flows into the Thames at Bow Creek.

In medieval times wheat was transported by barge to watermills on the river. Barley and malt were also taken down the Lea to London breweries. “London manure” (i.e. human waste) and building materials such as timber and bricks were also transported by barge. Brick making was a major industry in Enfield – the last brickfield in Hoe Lane closed in the 1970s. Gunpowder was taken from the Royal Gunpowder Mills at Waltham Abbey and rifles and other weapons from the Royal Small Arms Factory at Enfield Lock.

From the 12th century onwards various improvements were made to aid navigation between Hertford and London. In 1738 trustees were given oversight of navigation on the river. In 1766 the River Lee Act authorised the building of new locks and cuts including a new outlet to the Thames. The building of the Limehouse Cut was supervised by the civil engineer John Smeaton. Further improvements took place in the 19th century, providing links to other canals, and in 1869 the Lee Conservancy Board took over responsibility from the trustees. The Lee Navigation was nationalised in 1948 and control subsequently passed to the British Waterways Board.

Following the construction of the King George V and William Girling reservoirs in the 20th century, the River Lea was diverted to the east from its original meandering course and it now marks the new eastern boundary of the Borough of Enfield.

For more information visit the London Canal Museum near Kings Cross station or see Jim Lewis’s comprehensive series of publications on the industries of the Lea Valley, Enfield Archaeological Society’s Industrial archaeology in Enfield, David Pam’s and Monica Smith’s four volumes of A history of Enfield and Graham Dalling’s Enfield Past, Southgate and Edmonton Past and The Enfield Book. These publications may be consulted at Enfield Local Studies Centre and Archive, which supplied some of the illustrations here. 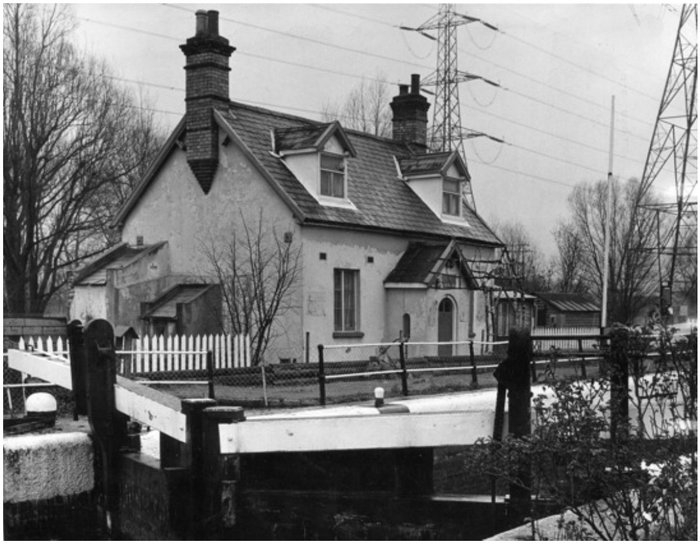 Picture courtesy Enfield Local Studies Centre & Archive
Illustration 1: In Enfield there are locks on the Lee Navigation at Rammey Marsh close to the M25, Enfield Lock, Ponders End and Picketts Lock, Edmonton. Lock keepers’ houses were built in the 19th century. In 1922-3 locks between Hertford and Enfield, including Rammey Lock shown here, were rebuilt and enlarged. 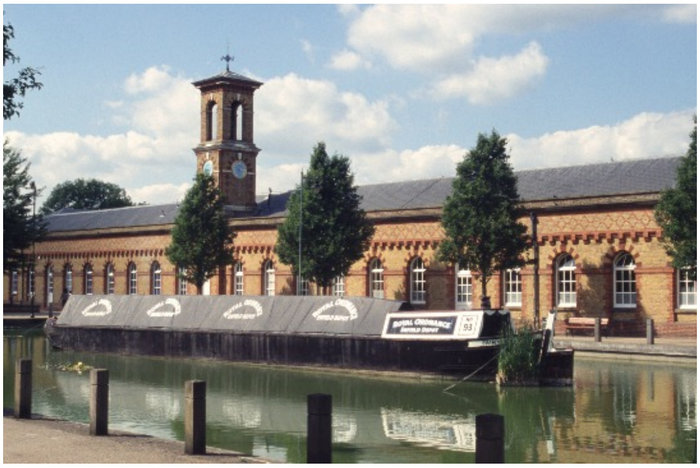 Illustration 2: What was to become the Royal Small Arms Factory opened at Enfield Lock in 1816. The Grade II listed main machine shop of 1854-8 had a direct canal link to the Lee Navigation. This enabled raw materials to be brought in and weapons to be transported out by barge. There was also a rail link to the Lea Valley line and a narrow gauge line to the Royal Gunpowder Mills at Waltham Abbey. After the Royal Ordnance Factories were sold to British Aerospace, the Enfield Lock site closed in 1988 and was redeveloped to form Enfield Island Village. Some of the more important buildings were preserved and converted to new uses. (For more information see TES News, nos. 185 and 187). 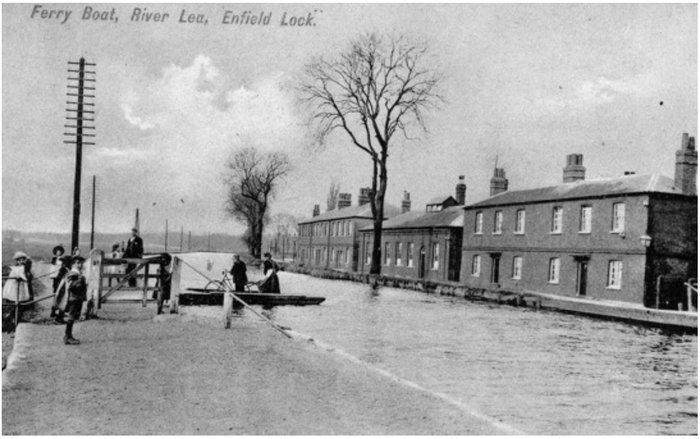 Picture courtesy Enfield Local Studies & Archive
Illustration 3: This Edwardian picture postcard shows a passenger ferry at Enfield Lock. 81 cottages were built between 1854 and 1858 in Government Row to house the Royal Small Arms Factory workers. They are listed Grade II for their group value. 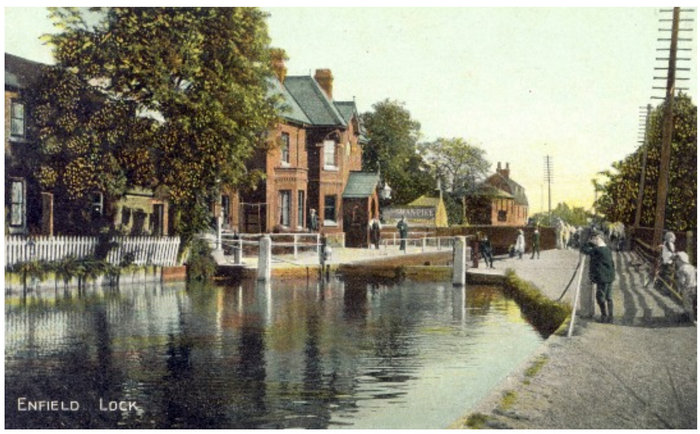 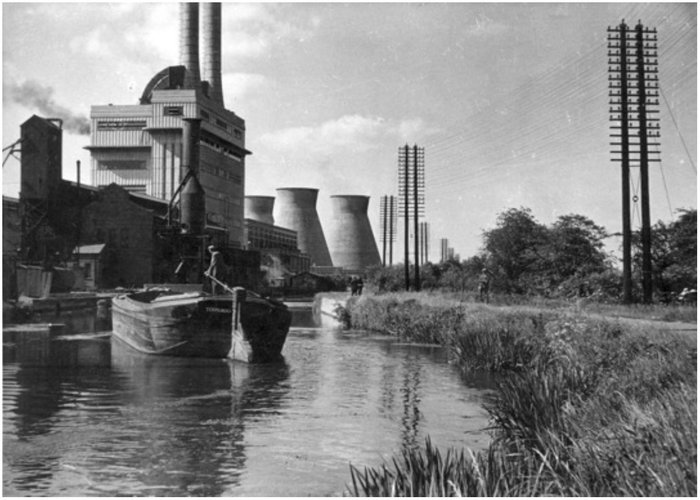 Picture courtesy Enfield Local Studies Centre & Archive
Illustration 5: Brimsdown Power Station was built by the North Metropolitan Electric Power Supply Company, initially to provide power for the electric trams. It opened in 1904 and was extended in 1939 to meet the increased demand for electricity from domestic and commercial customers. The availability of cheap electricity encouraged industrial development and many factories were built in the area. The coal used to generate electricity was brought in by train rather than by barge. The power station closed in 1974 and was later demolished along with its cooling towers. In 2000 the American-owned Enfield Energy Centre opened a natural gas fired electricity generating power station on the site. 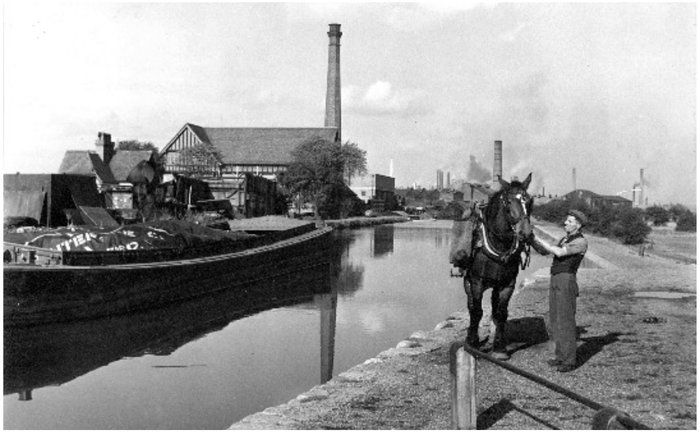 Picture courtesy Enfield Local Studies Centre & Archive
Illustration 6: This 1950s view, looking north from Ponders End Lock, shows one of the last horses used to pull barges. In the background are various factories. On the centre left is the former Thames Water Authority Pumping Station of 1899, which was converted into the Navigation Inn in 1995. In 1886 a former jute factory in Duck Lees Lane was taken over by the Edison Swan United Electric Light Company (Ediswan) for the manufacture of Sir Joseph Swan’s electric light bulbs. Sir James Dewar invented the vacuum flask at Ediswan and in 1904 Professor Sir Ambrose Fleming invented the thermionic diode valve, which marked the beginning of the electronic technological revolution. Britain’s first radio valve and television cathode ray tube factories were opened at Ediswan in 1916 and 1936 respectively. The company became part of Thorn-AEI in 1961. The Ponders End factory closed in 1969 and the only remaining building on the site is the 1890 former office block. Because of its historical importance this building has been put forward for listing. 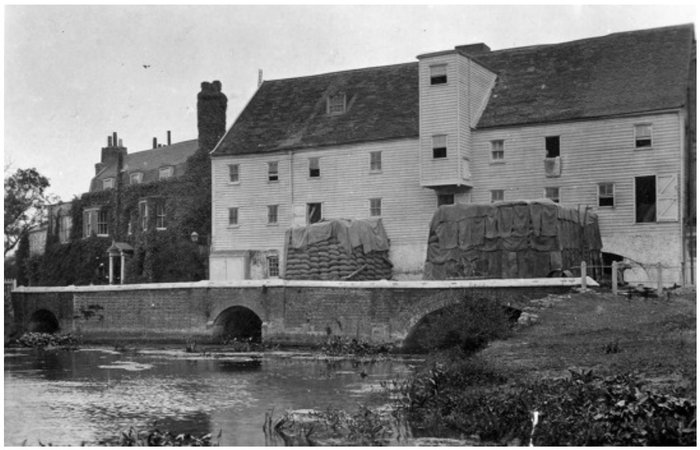 Picture courtesy Enfield Local Studies Centre & Archive
Illustration 7: There has been a water mill at Ponders End since at least the 16th century and possibly since Domesday in the 11th century. This 1910 view shows the Grade II listed 18th century part-weatherboarded Wright’s Flour Mill, which is Enfield’s oldest working industrial building. Until 1909, when electric power was introduced, the mill was powered by water from a mill stream diverted from the river. The mill buildings, 18th century miller’s house (on the left in the photograph) and water meadows make up the Ponders End Flour Mills conservation area. (For more information see TES News, no. 180). 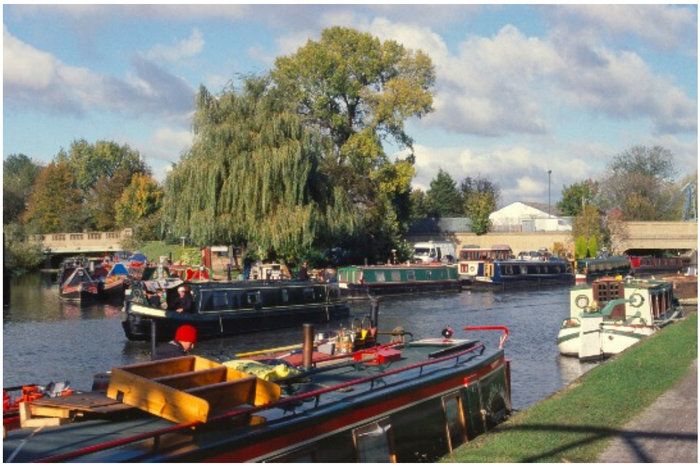 Illustration 8: Many of the narrowboats now to be seen on the Lee Navigation are moored at Ponders End. North of here most journeys are now made for pleasure, although even in the 21st century at least one of the narrow boats was offering to transport coal, oil and gas. 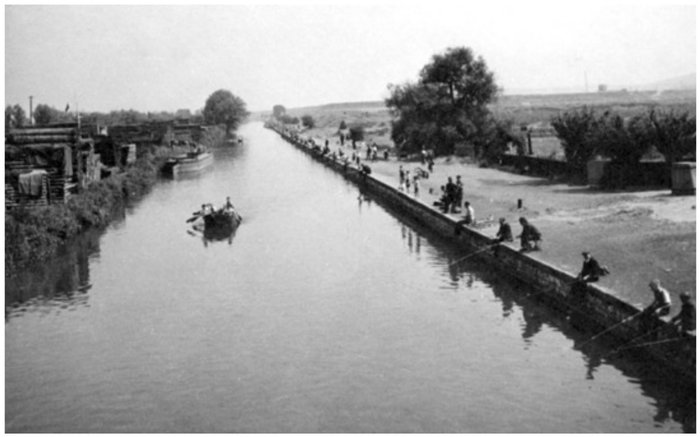 Picture courtesy Enfield Local Studies Centre & Archive
Illustration 9: Fishing and boating for pleasure on the River Lea on a Sunday in 1951. 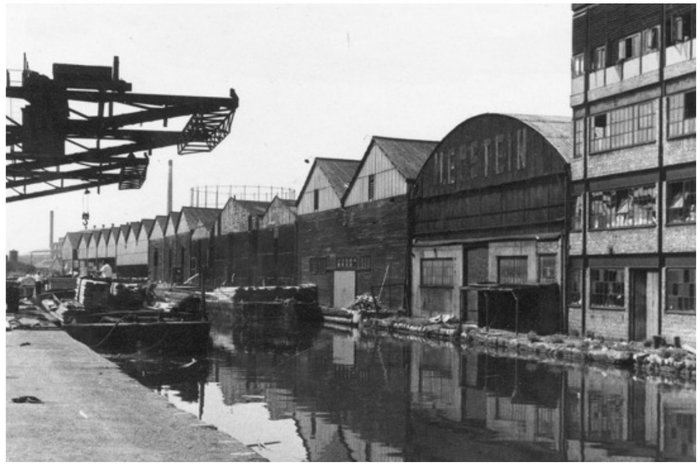 Enfield Local Studies Centre & Archive
Illustration 10: This 1964 view south of the Angel Road bridge in Edmonton shows barges laden with planks of timber, ready to be lifted by crane to the furniture factories which then lined the banks. In the background is a gas holder. (The Angel Road gasworks originally opened in 1847.) This area is now part of the Meridian Water housing development.
Bookmark the permalink.